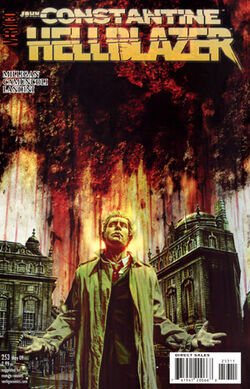 Hellblazer #253 May 2009) concludes the 'Scab' storyline as John figures out what's behind his illness and finally corrects a terrible error he made years before.

Back in his home town of Liverpool, Constantine calls in at his uncle Roy, who's not pleased to see him at all. But he lets John in all the same and leaves him to tend to the scabs that are starting to cover his entire body. Later, John walks in to see Roy watching a news report on the murder of Sir Lawrence Downing, and is overcome by claustrophobia as he recalls meeting Sir Lawrence years before, and doing some kind of shady deal with him.

Just then, John's phone rings. It's Phoebe, who tells him that he'd done a great job of convincing her that she'd just had a nightmare but that a second scab-baby hiding in the closet gave the game away. He tells her that she'll have to burn it and offers to talk her through it, but she hangs up.

Constantine arrives at Sir Lawrence's house and sees a trail of scabs leading away from it. He follows them to another house, where he finds its two occupants murdered and Mal Brady in the kitchen, glugging beer from the fridge. Brady turns on Constantine, but backs down when the magus talks about how Brady turned traitor. Brady explains that the owner of the house was a media liaison officer, 'which meant he spread lies to the media about the workers'; the the other body was his wife. He asks who Constantine is, and John shows Mal his scabs and says that he's the man who ruined his life.

Back at Roy's Constantine is repairing the damage he'd done years before. It seems that 12 years ago Constantine was paid by Sir Lawrence to put a hex on Brady, then leading a dock-workers' strike, to convince him to pocket a payoff from his bosses. The information was then leaked, leding to the destruction of the docker's union and the strike. But over the years the magic curdled, folding back not just on Brady but on Constantine as well - hence the scab, a physical manifestation of guilt and bad magic.

But the rite isn't doing a thing. Constantine tries to convince Mal that he's innocent, that it's not his fault, and then realises - the bad juju isn't coming from Mal's guilt, it's coming from John's own shame. So to make amends he heads down to where the docks used to be, starts mouthing off about the dockers and lets them beat him up. With his guilt assuaged, the ritual is performed and the scabs are cleared away forever. With things back on track, Constantine asks Phoebe to meet him at The Granby when he's in London. But Phoebe doesn't come to meet him and John realises that their relationship is over.

Retrieved from "https://hellblazer.fandom.com/wiki/Hellblazer_issue_253?oldid=11339"
Community content is available under CC-BY-SA unless otherwise noted.