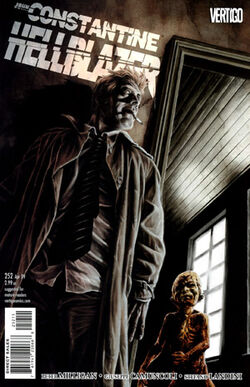 Hellblazer #252 April 2009) continues the 'Scab' storyline. In this issue John comes to Phoebe's rescue and realises that the cause of his infection lies in his hometown.

Phoebe tries desperately to keep a door between her and the scabby child-thing that's appeared in her home. She tells it that she had the abortion when it was no more than a handful of cells and that she doesn't want it, but it smashes through the door anyway. Desperate, she jumps out of her bedroom window, where she's caught by John, who'd only just got her answerphone messages.

He enters the house and finds pieces of scab tissue on the ground, but soon leaves and declares the house clean and says that she must have had a nightmare. She decides not to spend the night alone and they head off to her friend Aisha's where, over a bottle of wine, she tells John about the abortion she'd had 10 years before.

John leaves Phoebe there and heads back to her house, where he cleans up the scab particles before heading home - not realising that the scab-child is clinging to the underside of his taxi. At home John applies some more of Julian's old skin to the scab, noting that while it doesn't help the scab much it does have a calming, almost narcotic effect. It's then that he notices the huge 'L' spelled out on the scab covering his chest...

Elsewhere, an elderly man named Lawrence investigates a noise at the bottom of his garden. There he finds Mal Brady, covered in scabs, accusing Lawrence of turning him into a Judas. Lawrence smells the decay coming off the scabs and offers to help Mal get treatment, but Mal refuses and lunges for Lawrence's throat...

John finds the scab-child crying in his flat. It asks for a cup of tea with two sugars - the same way Phoebe likes it - and says that all it wants to do is get to know her. John tells it it's not a real person and it says that it has memories and emotions. But they're Phoebe's memories and Phoebe's emotions, and John isn't having any of it, so he smashes its head in with a decorative African statue before burning it.

But as it burns, some of the scabs form into a newspaper: the Liverpool Echo. John grabs and reads the headline, about dockers' union officials caught in a sleaze sting, and realises that the L on his chest stands for Liverpool, his home town. The next day he's on board a train and heading straight for a confrontation with Mal Brady.