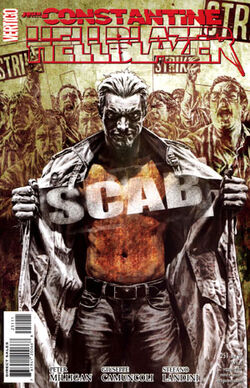 Hellblazer #251 (March 2009) is the first issue of Peter Milligan's run on the series. In this issue John and his latest girlfriend, Phoebe, find themselves dealing with a particularly nasty infection.

Liverpool, 1996: a furious crowd has gathered outside the house of one Mal Brady, accusing him of being a 'Judas'. He tells his wife, Mary, to call the police but she's as angry at him as the crowd are, and for the same reason: he broke a picket line for quick money. Just as he begins to defend himself, a brick tumbles through the window and hits his head...

London, 12 years later. John is having a heart-to-heart with his latest girlfriend, Phoebe. After hearing about his horrible life, she asks whether he's trying to scare her off, and he says that he is - he's in the habit of poisoning anything that gets close to him. She replies that she's not scared of what might be coming - though she is a bit worried about all the scratching John's doing. She opens up his shirt to reveal that his entire chest is covered by an enormous, crusty scab. Being a doctor, Phoebe takes a sample for her colleague Aisha to analyse, while Constantine heads off to find an 'alternative medicine'.

The medicine in question is courtesy of Julian, an ancient Babylonian demon who sheds his skin every night. Julian's currently taking the form of a schoolgirl, noting that 'The school playground is a real education in imaginative forms of demonic cruelty.' Julian gives John one of his old skins, telling him to heat it and rub it into the affected areas.

Elsewhere, Mal Brady is muttering to himself about how a 'voice' told him to take the money all those years ago. He stumbles into a chemist's shop and reveals that he's suffering from the same scab problem as John.

Aisha puts her head around the door of Phoebe's office, inviting her out for a post-work drink. As Phoebe stands, the flake of scab floats off her desk and settles onto the back of her top. At the pub, Pheobe tells Aisha that she and John had discussed everything about themselves - everything but the abortion she'd had 10 years back.

Later that night, Phoebe is sleeping when the scab flake rises up again, floating over to her head and climbing into her ear. Suddenly, she awakes and hears noises in the flat. Opening the door, she is horrified to see a small, troglodyte-looking creature in her living room. The monster shambles towards her, calling her 'mummy'...

Retrieved from "https://hellblazer.fandom.com/wiki/Hellblazer_issue_251?oldid=8196"
Community content is available under CC-BY-SA unless otherwise noted.