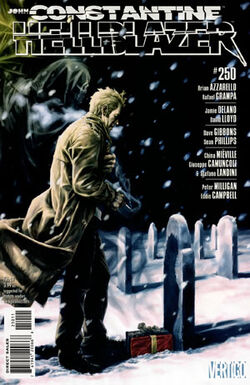 John Constantine: Hellblazer #250 (February 2009) is a combined anniversary and holiday issue featuring five short stories, including one by Peter Milligan, who became the comic's regular writer with the next issue.

The issue begins with Constantine making two resolutions: don't get involved and don't do favours for anyone. He immediately breaks both rules when Edward Devere Marquiss, the highly-connected security director of The British Museum, asks him to find a 3,000-year-old golden sickle that has been stolen from its display cabinet by a crazy Egyptologist named Alistair Carswell. Working on a tip from a friend who oversees London's security cameras, Constantine head to a party on the banks of the Thames. He gets distracted by a woman in a nurse costume just as Carswell makes off with a baby.

Realising that Carswell plans to sacrifice the baby in front of Cleopatra's Needle in order to gain eternal life, Constantine gives chase but the crowd proves too heavy. Instead, he jumps over the edge of the protective railings and onto a party boat passing by on the Thames below. He grabs a bottle of champagne as a weapon and runs back onto the bank by the needle, just as Carswell raises his sickle. John uses the bottle to block the sickle and, before Carswell can turn the weapon on him, gives him a swift kick in the balls.

John stashes the sickle just as the police - and, more importantly, the naughty nurse - show up. With a nurse on his arm and a magnum of champers in the other, Constantine rings in the new year.

Hiding from the festivities in 'Dave's Poker Bunker', Constantine swills his drink and waits for Chas to drop out of his poker tournament, which he quickly does thanks to the bullying tactics of 'Barry the Bandit'. The only two men left at the table are Barry and a sallow-faced man whom nobody recognises but who is slowly winning against Barry's tactics. This is bad news for 'the Bandit' as he's already late to pay up some bad debts to Turkish Tony.

Constantine takes a peek in the grim-faced man's mind and sees a memory of a little girl, the man's daughter, running up to him. The bartender offers two-to-one odds on Barry winning; John and Chas both put money down on the thin man winning. It looks grim as Barry wins a hand. As he faces defeat, the thin man thinks of his daughter again: how she left to England to support her family, how she was press-ganged into prostitution and begged her father to save her, and how her pimp told him he didn't have enough money to buy her back.

The thin man puts in all his money and lays down two aces. Chas comments that if Barry has two queens it's all over. John says that he does. But as Barry gets ready to deliver the killing blow he feels a pang of conscience about the life he's living. Acting out of character, he folds - gives all his winnings to the man - and leaves to face up to Turkish Tony. 'Don't drop your guard for a moment,' muses Constantine, 'or the spirit of fucking Christmas will rip the best from the very worst of you.'

'All I Goat for Christmas'

Told in the form of a poem, the story begins in Chicago, where John, accompanied by a goat on a piece of string, is met by a group of men. They hand him a wad of money and usher him into a pub. The narrator explains that in 1945 a Greek man named Sianis brought his pet goat to the Chicago Cubs stadium but was refused entry. He consequently cursed the club, saying that it would never win another World Series.

Constantine promises to break the curse and starts pouring the men beer, telling them that to complete the ritual they will have to eat the animal. He breaks a bottle of whisky on the bar and cuts the goat's throat. As it dies, it transforms into a monstrous demonic goat creature. It swats John over the bar, but before it can deliver the killing blow, the ritual takes hold and it collapses. John drinks his beer and leaves as the men in the bar devour the demon's raw corpse.

'The Curse of Christmas'

The story opens on George, a put-upon speech writer for the Prime Minister who finds himself working on Christmas day. His wife drags the documents out of his hands and demands that he go see the children.

Meanwhile, in The Granby pub, Constantine is pulling up a pint with a rather annoyed ghost. The sprit was, until a year ago, an upwardly-mobile MP called David Brown who fully expected to get a cushy job in the Government's finance offices. Unfortunately for him - and two other MPs - something caused them to slash up their own bodies at the same time on Christmas day. Constantine explains that they were struck by a death curse, but can't figure out what the vector was - until he sees the Queen giving her speech on TV.

After questioning David, Constantine heads over to George's place. It turns out that George was responsible for writing the passages that the Prime Minister added to the Queen's speech that year. Since he was so upwardly mobile, reasons John, he must have put the hex in to open up some tasty new positions in the cabinet. George denies everything, but John won't leave until he knows the truth - otherwise he'll have to put up with David's ghost following him around everywhere.

At that moment George's wife arrives and explains that she inserted the hex to ensure George moved up and their children got more money. As George and his wife start having a monumental argument, Constantine heads off, noting that when it comes to happy families, Christmas is the real curse.

In an unnamed country, Constantine approaches a series of medical tents in a small town outside a massive industrial plant. Inside the tents are some poorly children being looked after by a padre. He explains that after the plant exploded it showered the area with some kind of dangerous substance. The adults ran inside, but the children - who had seen pictures of snow in Christmas books that had been donated to the church - went outside to play in it. The poison in the ash made them ill and, worse, faceless devils began to appear: terrifying, burned-looking things trying to get to the children.

John breaks into the industrial plant and senses that it is involved in something supernatural, but can't quite find out what. He's confronted by the plant's owner, who admits that magic is involved somewhere in the process but denies causing the explosion, since it's cost the company huge amounts of money. Constantine counters that it would be worth the cost for the factory to keep the local populace cowed but again the manager shrugs the accusation off, suggesting that the two burly men who have just entered the room would be enough to keep the locals at bay. He tells them to escort John from the premises while he goes to spend Christmas with his family.

Outside, Constantine - now with a few more bumps and bruises - calls his friend Dave, the man who sent him on the fact-finding mission in the first place. Dave, it seems, is some kind of demonic stockbroker and agrees that it sounds like it was a genuine accident. He explains that he wanted John to take a look just in case, since the plant is rumoured to be rendering pure evil and the explosion has upset the stock market. On hearing this, Constantine has a brainwave.

John returns to the tents just as the devils arrive once more, but he asks the priest to calm down. He explains that while the ash may have had some poisons that made the children sick, the ash itself was far more potent. The plant was purifying evil itself, which meant that the waste ash created by the plant was pure good. Pure good that took on the form of angels, not demons, thanks to the 'snow angel' shapes the kids were making in the snow. And now, frightened, they have returned to the place where they were made to find out what they were made for.

The priest, seizing his chance, tells them to 'smite evil'. Soon after, the plant manager's Christmas celebration is interrupted when the angels fly down his chimney and consume him.

John gets ready to leave, warning the priest that the plant was a company - more than just one manager. But he adds that the children have been saturated with pure goodness and may manifest other strange abilities in the future. He tells the kids to call up their guardians whenever they see injustice, then heads off, cigarette in hand.