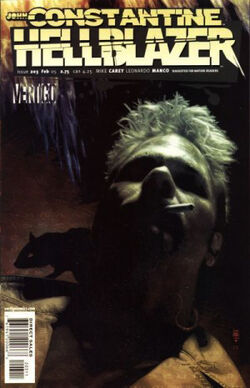 A petrol tanker has crashed and exploded, destroying the cabshack in which John Constantine's best mate, Chas, spends most of his time. It has no doubt killed anyone with the unfortunate luck to be caught inside.

Is Chas, John's only real connection to a normal life, dead? Almost, but a horrified John had been on his way to see Chas and arrived on the scene in time to see the explosion and with enough time to pull an ungrateful Chas from the fire, while above on the bridge, a disappointed Maria (whose failed task it was to kill Chas) watches as her brothers, Adam and Saul, tease her for her failure. But Maria can tell that someone very powerful has thrown support in with John against the children--she deduces whoever it is must be powerful since they are the children of Rosacarnis and of the lineage of Nergal.

The creature who had up to this point been keeping his true presence hidden in the form of a rat, leaps into Chas' body and demands to have a talk with John as equals, finally.

Next, John's old neighbor Straff and his auntie Lil, with whom he lives, are punctured, stabbed and sliced to death by animated kitchen cutlery.

The entity who is in control of Chas informs John that he knows all about John's offspring sired with Rosacarnis, and their "war" against their father. He informs John they can't kill him, and that's why they are systematically going through John's emotional rolodex, killing or attempting to kill each entry contained therein.

Adam then destroys the ghost of Sir Francis Dashwood, founder of the Hellfire Club.

In the meantime, Chas' possessor has started a good old fashioned bar brawl to snap Constantine out of his depressing funk, they are chased from the bar by coppers who almost catch up with the two until John headbutts the closest of them, and they make their escape after almost being hit by a train with divides them from the pursuing coppers. It turns out that the entity was testing John's reflexes, to which an angered John punches Chas in the face upon that admission.

It is then that the children's next two victims are revealed to the reader: Angie Spatchcock, who is suffering from a nightmare she had when she was a little girl. And John's neice Gemma Masters.

Retrieved from "https://hellblazer.fandom.com/wiki/Hellblazer_issue_203?oldid=8611"
Community content is available under CC-BY-SA unless otherwise noted.