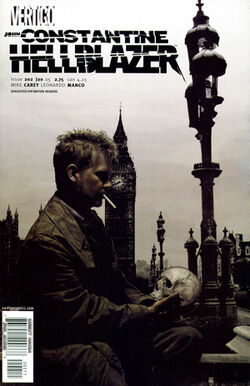 John Constantine has become a father. Through magic, coercion, and deciet, the she-demon, Rosacarnis (daughter of Nergal and ruler of his domain in Hell) has borne three children of the Hellblazer's seed--Adam, Maria, and Saul--and has now unleashed them upon the world. But before they can realize their malevolent destiny, the children must first confront and defeat their mortal father, a powerful and cunning mage.

They cannot just kill John outright as the necromancy which created them depends upon him staying alive. If he dies, so do the three of them.But his unholy progeny have hit upon an even sweeter plan--to kill everyone John has ever cared for until he so badly hurt to ever heal from it; to take away his reasons for living, one by one. And while still mentally blasted and emotionally shell-shocked from Rosacarnis' dark magic mindfuck, he's not in any condition to fight back.

First of their victims, Alba Suria. Then an unsuccessful attempt to go after Map. Next, a failed attempt to kill Clarice Sackville at the Tate Club results instead with the gruesome death of her longtime companion, Albert. He shoves her back inside the club and presses himself against the door, keeping it shut tight as a storm of broken glass--brought from "one little green bottle" knocked off the roof by Adam--shreds and slices everything and everyone outside on the street--except for John.

Map comes to John after he leaves Clarice's hospital bedside to tell him of Alba's death and the attack on Map. Map accuses John of knowing what's going on, but John states he's done his bit at saving humanity and that this one is on Map.

The issue ends after Maria has hitched a ride from a petrol tanker truck, and once in the cab, seduces the driver by straddling him and causing him to lose control of the tanker just as it crosses over the bridge which happens to cover the cabshack/garage where Chas spends his down time with the other London cabbies with whom he works. The tanker explodes and destroys the cabshack, no doubt killing anyone with the unfortunate luck to be caught inside.

Is Chas, John's only real connection to a normal life, dead?

Retrieved from "https://hellblazer.fandom.com/wiki/Hellblazer_issue_202?oldid=11031"
Community content is available under CC-BY-SA unless otherwise noted.