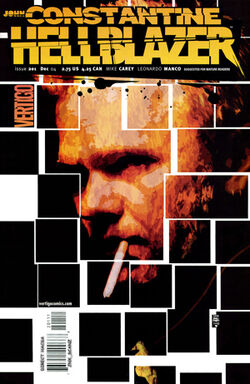 John Constantine: Hellblazer #201 (DECand 2004) When a trio of thieves makes the mistake of stealing a rare and cursed magical artifact from John Constantine's lock-up, they soon learn the hard way that they've nicked from the wrong bloke.

The issue begins with three bumbling thieves in the act of breaking into John Constantine's old warehouse to steal artifacts. They sell them to a violent fencer who nearly pushes one's eyes out, for about two thousand dollars, when they had expected twice that at least.

The three thieves head off to their place and have an impromptu heroin party, unaware of what they've gotten themselves into. "Paxo", one of the three thieves, winds up having a terrible dream involving multiple skeletons clawing at his skin. The next day, he talks to his girlfriend, explaining he had kept a bracelet from the warehouse heist. She tells him if it bothers him so much, she'll take it. He gives it to her and then goes off to the bathroom.

Hours later, after Paxo doesn't come out, she figures he's left and runs to his best friend "Mick", the two talk and get high, eventually having sex in response to Paxo taking all their share of the money. After they fuck, she gets in the shower and the walls close in on her. Thinking it's a bad trip, she freaks out...and cut to....

Mick finds out about the bracelet that Paxo left with her and immediately goes to look for her. He finds her locked in a closet with skeletons clawing at her nude body.

Mick shoots up some heroin and heads off trying to deal with what he's just seen.

We next see Constantine talking about the blokes to a large fat business man about what's probably happened to the thieves so far with them in possession of the mystic stone and bracelet.

The issue ends with Mick sinking through the floor into the bracelet with the other three thieves with Constantine giving a "told ya so" nod..