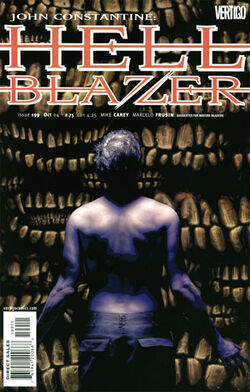 John Constantine: Hellblazer #199 (October 2004) Solicitation Text: The shocking conclusion to the 3-part "Stations of the Cross" story arc! When all intrigues are laid bare and all masks thrown aside, John must look to one old enemy to save him from another. But sometimes the helping hand is a lot more dangerous than the one that stabs you in the back.

A huge, goat-headed demon towers over the bound form of John Constantine and claims blood right on his soul. The rest of the assembled demonic horde are quick to dispute the creature’s claims, dismissing it out of hand as Ghant reveals the price he seeks for Constantine - he wants theprophetic maws that lie embedded in his skin removed. Aware that all of those present are capable of granting his wish, Ghant adds a qualifying statement - the beast that comes up with the most imaginative torture for John will be the one who gains his soul. Ghant is determined to make sure that John will never forget him again.

Ghant’s mind wanders back to his first use of the Bone Abacus in John’s presence. It had given him a vision of the events which were now playing out in the present, with Constanine being sold at his whim.

The demons make their pitch. One plans to grow a million Constantines, moving his soul from one to the next as he kills each in some new and interesting way. Another promises to drive John mad, to make him rape and murder all of those that he loves. Agony & Ecstasy, envoys of hell, offer to take Constantine to the height of pleasure before plummeting him into torment of total despair. A horned beast mocks their efforts, and wonders aloud at the merits of the being responsible for giving them a voice in hell’s affairs. An ill-timed musing as the one responsible, the First Of The Fallen, chooses that exact moment to arrive on the scene.

The creature prostrates itself before the First, begging forgiveness for its insolence. The First points out that the twins predate his time, having been put in place by his predecessor Lucifer, before disintegrating the terrified demon with a mere touch of his fingers. Ghant apologises for not having invited the first and dismisses the assembled demons. The First ignores Ghant’s babbling and orders him to remove the gag from Constantine’s mouth, John shoots Suzie a wink as The First moves to stand before him.

Constantine spurts out a melodramatic, over the top plea for The First to kill him. The Lord Of Hell senses that something is amiss but Ghant mores to assure his doubts, telling him that John has just lost his memory. Constantine continues his pleas, trotting out the most over-the-top John-sounding hyperbole he can muster before breaking down in tears and apologising to Ghant, claiming that he’s forgotten the words!

Convinced that Ghant has tried to trick him with a simulacrum of Constantine, The First flies into a rage and grabs the squirming man by his beard. Ghant protests his innocence but his suggestion that The First check John’s arse for his infamous tree tattoo goes down about as well as you’d imagine with The Lord Of Hell. The First orders two demons to drag Ghant with them as he returns to his throne in hell.

John spots the keys for the cuffs that bind him and Suzie nearby and together the pair manage to eventually free themselves. Their relief is short lived however as they make their way back up into the church and find themselves face to face with the enraged remnants of Ghant’s flock, led by Margaret. Constantine and Suzie are easily overwhelmed and tied to a makeshift pyre made from chairs. Suzie pleads desperately with Margaret but her former friend just spits in her face.

The chairs are set alight and as the flames lick higher and higher, the spectral form of Rose appears before John, once again offering to restore his memories in return for twenty four hours of his life. Left with little choice, Constantine relents and agrees to accept her offer. John refuses to leave Suzie behind but Rose’s solution to that particular problem, reducing her to a burnt out husk, doesn’t seem to be quite what he had in mind. Rosacarnis turns her power on the raging crowd around John, leaving them all burnt alive as John fades from existence.