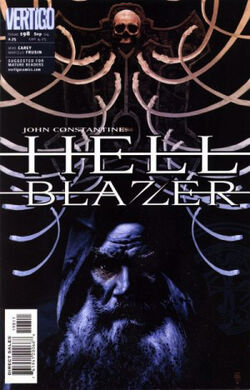 John Constantine: Hellblazer #198 (September 2004) Solicitation Text : “Stations of the Cross,” Part 2 of 3. Imprisoned and tortured in the mazelike sub-cellars of a cult church, Constantine escapes with the aid of an unlikely ally. But how much use will she be in a house filled with one of the oldest and most ruthless of his enemies ?

John Constantine hangs beaten and chained before a furious Ghant. Still suffering from amnesia, John tries to convince him that he’s not Constantine but Ghant, in turn, confronts him with the evidence of his identity – he’s the spitting image of John, his blood boils in holy water and he has a tree tattooed on his arse. Ghant tells John that the inhabitants of his soul abacus all escaped after the events that transpired in Gruinnard and set up shop in him, leaving his body pock marked with dozens of fanged mouths. On the bright side, some of the mouths can speak prophecy, a fact that Ghant was able to exploit in order to found his own religion. As if on cue, the mouths start to speak, warning John that he will fall three times when “she” says his name and that he should ask her name as “it’s an act of incest”.

In the main room of the church, Terry delivers a blood and thunder speech decrying Constantine as a servant of the Beast to the assembled congregation. A concerned Suzie stands amongst the watching crowd.

In the kitchen, Ghant feeds his chattering mouths a meal of raw meat. They regale him with suggestions on how to dispose of John, with one of them warning that he should dispatch Constantine immediately before he manages to destroy Ghant.

Left to their own devices, the two men left guarding John decide to give him a bit of a kicking. Suzie interrupts their extra curricular activities, informing them that Constantine is to burn. She sends the pair out of the room to collect kindling, slamming and locking the door behind them as they leave. Suzie scoops up a nearby axe and swings it down at John, shattering the chains that bound him. She tells a stunned John that she’s lost her faith.

On the roof of the church, Terry approaches Ghant, anxious to assure him that he’s calmed down the congregation after John’s dramatic capture. Ghant shows his appreciation for Terry’s efforts by stabbing him in the belly. Spurred on by chattering mouths, Ghant cuts out Terry’s ribs and etches strange carvings onto them before tossing them on a fire.

Suzie tells John that a lot of people have been disappearing from the church and that the most recent of those disappearances, that of the young boy Hughie, led to her loss of faith. She pulls open a grate in the floor revealing a series of steps that lead down into the darkness. Suzie pulls out a torch and the pair head down into the tunnel before them as Ghant’s men try to knock down the only door into the room. John and Suzie travel deeper and deeper into the tunnels until they stumble across a room piled high with decomposing corpses. Terrified, Suzie lets out a loud, piercing shriek.

Elsewhere, a huge demon lumbers out from hell to stand before Ghant, who informs him that the others are already present. The demon demands to know where “he” is.

Alerted by Suzie's screeching, Ghant's followers are now mere steps behind Constantine and Suzie as they run blindly through the tunnels beneath the church. John stumbles into an unseen pit of quicksand and Suzie’s attempts at freeing him prove to be less than successful, leaving the pair plummeting down into the darkness within.

John and Suzie come to in a vast columned chamber and find themselves facing an angry Ghant, who in turn is flanked by a host of terrible demonic creatures. Ghant addresses the assembled demonic host and asks them to place their bids for the soul of John Constantine.