John Constantine: Hellblazer #197 (|August 2004) Solicitation text: Kicking off the 3-part story “Stations of the Cross.” Back in London, John is drifting through a life he no longer understands — until a bizarre cult offers him salvation and a bed for the night. But the religious life holds unforeseen perils, and behind an old adversary lurks the ultimate puppet-master.

A homeless boy sits soaked to the skin on the rain swept streets of London. His sullen thoughts interrupted by the appearance of two beautiful young women who introduce themselves as Suzie and Margaret. Surprised by the fact that the pair know his name, Hughie, and tempted by their offer of a clean bed and a warm meal, he decides to follow them to their nearby church. The women lead the boy through the packed main hall of the church where a sermon is already in progress. A man that Margaret identifies as Terry preaches about the Beast that recently stalked the world to the crowd assembled before him . Suzie and Margaret leave Hughie with the Prophet, a tall man cloaked from head to foot in a flowing red robe.

John Constantine, suffering from a case of amnesia, slumps asleep in the entrance to a tube station, whatever respite he found in his slumber quickly dispersed by the arrival of two tramps who inform him that local shopkeepers have his hidey hole doused with Detox every night. A weary Constantine stumbles back onto the streets and is taken aback when a nearby discarded teddy bear is suddenly covered by swarming maggots that form themselves into the terrible visage of Rosacarnis in her form as the little girl Rose. She taunts John with the fact that she can return his memories if he agrees to give her twenty four hours of his life - Constantine refuses and runs off into the night.

Hughie’s meeting with the Prophet takes a turn for the horrific when the robed man holds up his hand to reveal the gaping maw of a clawed mouth in his palm. The Prophet closes his hand over the startled boy’s face.

John sets up shop outside a pub but his efforts at begging are brought to a violent end when a large homeless man accuses Constantine of moving in on his pitch. The pair come to blows and John panics when he knocks his assailant to the ground, he once again takes flight, leaving his attacker unconscious and bloodied behind him. Constantine’s desperate flight leads him into the welcoming arms of Suzie and Margaret who manage to convince him that he should return with them to their church. When they get there, John’s wounds are treated by Terry.

Elsewhere in the church, Suzie tells the Prophet about Constantine’s arrival and inquires after the whereabouts of Hughie. The Prophet tells her that the young boy left of his own accord.

His cuts cleaned and bandaged, John treats himself to a warm shower. As the water pounds off his body and winds its way down the plughole, the words “There’s still time to kill yourself” form around Constantine’s feet. John takes that as a subtle hint to make his exit but he finds his way blocked by Terry and Suzie. Terry tells him that the church doors will remain locked until the Prophet has delivered his sermon. Suzie ushers Constantine into the main hall of the church where the rest of the congregation have gathered.

The Prophet, standing on a raised dais in the middle of the room, asks for the newcomer to approach him. The crowds part before John as he makes his way towards the dais, as he gets closer to the Prophet he gets the flash of an old memory - someone standing before him with a severed sheep’s head. The hooded Prophet shrieks Constantine’s name, prompting John to push him away before sprinting off the dais. The congregation restrain Constantine as the Prophet throws back the hood of his robe to reveal the face of Ghant. The robe opens to expose Ghant's chest, pockmarked with fanged mouths. 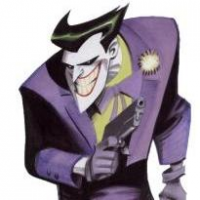