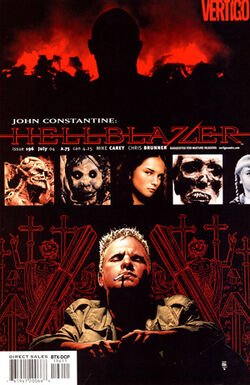 John Constantine: Hellblazer #196 (July 2004) Solicitation Text : “Out of Season,” Part 2 of 2, featuring guest artist Chris Brunner (BATMAN: LEGENDS OF THE DARK KNIGHT). In the bleak setting of a British seaside resort town in the dead of winter, John Constantine confronts the madman Peter Gill and is subjected to a terrible test to see if he is worthy to walk in a psychotic's footsteps.

John Constantine stands on the Cliffs Of Dover, still unable to recall any of his lost memories.

Peter Gill stands in a hotel room by the sea and surveys his handiwork. Chas Chandler lies bound and gagged in the bathtub, his wife Renee is similarly restrained in a chair, which his daughter Geraldine and Granddaughter Trish lie tied up on their beds. Gill puts Trish into his sports bag.

Constantine stumbles confused through a forest, the terrible memories evoked by his hypnotism still fresh in his mind. A flash of light catches his attention and he follows it through the trees till he comes to a large glowing doorway.

Peter leaves the hotel with his sports bag in hand, he throws it into the back of his truck and consults a tracking device he has, talking out loud he reveals that he's placed a bug on John and will be able to find him wherever he goes.

Constantine walks through the glowing doors and finds himself staring out across a grisly dining room where terrible demons gorge on the shredded remains of what once were humans. Rosacarnis sits at the head of the room and she invites the shocked John to join her. Unable to resist he starts to make his way past the feeding creatures but finds his path blocked by a towering creature called Agilieth who claims to be the sworn brother of Nergal. Rosacarnis does not take this well and she leaves the demon a broken, bloodied husk on the floor before her.

Chas tries to signal for help by banging his cuffs against the soap holder on the bathtub but the hotel staff are too busy cracking wise to come to his aid.

Sitting at Rosacarnis' table, Constantine tries to play it cool by smoking on a cigarette but even this once familiar act now seems alien to him. Rosacarnis changes into Rose as she pops an eyeball between her lips before reassuming her guise as a human woman. She offers John the chance to get his memories back if he swears allegiance to her for just one day but Constantine is disgusted and says that he doesn't want to lead the kind of life that could have him familiar with such surroundings. Constantine walks back out through the glowing doors and straight into Peter's fist, leaving him unconscious on the forest ground.

When John comes to, he's lying in the Chandlers' hotel room and Gill stands over him with a double barreled shotgun in his hands. Peter tells Constantine that he was sent by God to mold John into a new man. Keeping Constantine at gun point, Gill hands him a knife and tells him that he must kill a member of the Chandler family. John considers his options and then throws the knife out the window before scooping up the sports bag that still holds Trish and tossing it out the hotel room window after it.

Stunned, Peter looks out the window to see that the bag has landed on the pigeon nets that lie a few feet below. Constantine lunges at the momentarily distracted Gill and puts out his eyes with his thumbs before grabbing the shotgun and firing both shells into Peter's chest. John sets off the fire alarm and flees the hotel.

Back in Rosacarnis' dining hall, the lady herself seems quite pleased with the current turn of events. She asks her butler to bring her Peter Gill's soul.

Retrieved from "https://hellblazer.fandom.com/wiki/Hellblazer_issue_196?oldid=8653"
Community content is available under CC-BY-SA unless otherwise noted.