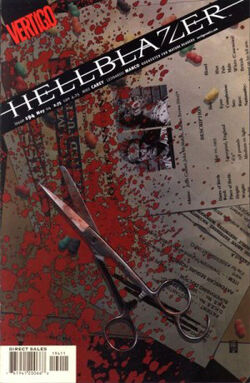 John Constantine: Hellblazer #194 (May 2004) Solicitation Text : Constantine's war with the Beast is done, but the repercussions go rolling on — not the least for John himself, as he wanders wounded through a shattered, shell-shocked London where an insane killer and a very strange little girl both take a deadly interest in his fate.

Deep in the heart of London, a businessman is accosted in some public toilets. His attacker, a large, well built man binds his hands and feet with restraints before pulling a knife from his jeans. The assailant taunts his victim with intimate knowledge of his family, including the fact that his wife was carrying on behind his back. The man's captor punctuates his sentences with viscous lunges of his knife, leaving the businessman a bloody, ruined corpse.

John Constantine, suffering from amnesia, wanders down along the banks of the Thames as the city around him tries to recover from the bloodshed wrought in the wake of his inadvertent release of the Beast . Constantine's travels bring him to a young girl who has a badly burnt arm partaking of a little fishing while a corpse floats face down past her. The girl introduces herself as Rose and John takes her to a nearby hospital but his good deed doesn't go unpunished when she tells the staff that he can't remember his own name. When pushed by surrounding orderlies for his personal details, Constantine claims the name he can see written down on a nearby form, Leo Sumner. John's lie is overheard by a burly man sitting nearby, the one responsible for the earlier murder. Unconvinced, one of the orderlies brings John upstairs to the psychiatric ward.

The murderer approaches the orderly who questioned Constantine and tries to convince him that he's there to pick John up. The orderly tells him to take it up with the doctor John's been sent to see. The man responds by telling the orderly that he was right to think that his dad might have been raping his younger sister.

John is brought to see Doctor Miles Bradshaw and admits that he took the name off a chart downstairs when he couldn't remember anything about his own life. Bradshaw has Constantine admitted onto his ward and tells one of his staff to run a missing persons check on him.

Rose it taken to the burns ward and bandaged up by a specialist, when she asks the young girl where the fire that burnt her was, she points to her heart.

On the psychiatric ward, the murderer approaches Constantine. He demands to know who John is, claiming that he knows everyone on the planet but him - to prove his point, he starts rattling off personal details for the staff and patients around them. Frustrated with Constantine's protests of ignorance, the murderer is about to get violent when several staff members come to John's aid. Unperturbed, the murderer smacks the nearest orderly with a bedside locker and quickly makes his escape.

Miles is surprised when one of his staff turns up some information on John from a years old police APB. He tells Miles that John once did time for murder in the States and that he's now listed as being dead. Elsewhere in the hospital, Rose burns a hole in a supply cabinet and walks off with a nasty looking pair of surgical scissors.

Bradshaw hypnotises Constantine. First he tells John to think back to his earliest memory but he can't remember anything prior to seeing the mist on the river that morning. Miles then tells Constantine to think of a face, a name or a voice, anything that he can remember from his past. John remains blank, so the doctor leans in close and utters "John Constantine" out loud. Constantine's mind is suddenly flooded with terribles memories of the past - Gabriel, Jack in The Green, Nergal, Astra, Ironfist, Slag and his own red eyed demon self. Rose wanders into the room as Miles brings John out of his trance. Bradshaw tries to escort the young girl out of his office but she attacks him with the scissors.

Constantine comes to, with the bloodied scissors in his hands and the eviscerated corpse of Bradshaw in front of him. Rose stands behind John, licking blood from her fingertips as she tells him that he'll get the blame for the doctor's murder. Terrified, and still mired in the depths of his amnesia, Constantine flees the hospital.

Retrieved from "https://hellblazer.fandom.com/wiki/Hellblazer_issue_194?oldid=11161"
Community content is available under CC-BY-SA unless otherwise noted.