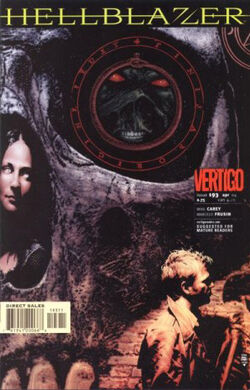 John Constantine: Hellblazer #193 (April 2004) Solicitation Text : The 5-part “Staring at the Wall” story arc reaches its apocalyptic conclusion, as the pathetic remnants of John Constantine's makeshift strike team run a desperate double bluff against the beast that is devouring the collective soul of humankind. With John missing and presumed dead, the Swamp Thing leads the charge — but death is nothing compared to what the Beast has in store for its enemies.

Mankind has been brought to its knees and there it waits in silence for the Beast to put it out of its misery.

Angie Spatchcock stands outside a lock-up in Streatham, a branch (#185) clutched in one hand with the other curled into a fist that knocks with a mixture of annoyance and frustration on the closed door before her.

Inside, the possessed Gemma Masters presses a razor blade into the soft skin of her comatose Uncle's neck but before she can make a fatal cut, she's distracted by the bloody great big car that Angie's just driven straight through the door and into the lock-up. Spatchcock clambers out of the car and confronts the possessed Gemma and Chas. As the pair circle Angie, the Beast notes that the branch in Spatchcock's hand blinded it to her presence. The Swamp Thing, none too bothered by his recent shotgun induced decapitation, sprouts another head and grabs Chas but before he strikes, the Beast withdraws, leaving the Taxi driver and Gemma unconscious.

Introductions are made as Gemma and Chas regain consciousness and it becomes apparent that Angie's arrival was all part of John's plan. The Swamp Thing is curious about the branch Spatchcock carries with her - she tells the Elemental that she got it from the Garden Of Eden and he realises what Constantine has in mind. Slicing his arm open with a razor blade, the Swamp Thing presses the branch inside the cut. Assimilating the piece of Eden, the Swamp Thing undergoes a startling transformation, sprouting a thick form of spiked armour all about him.

Deep in John Constantine's consciousness, the Beast sneers at the magus as he continues to hack at the tendrils that seek to enslave him.

The newly armoured Swamp Thing delivers some parting words to the last free humans before stalking off through the Green to face the Beast. With the branch and Swamp Thing now gone, Gemma is worried that the three of them are now defenceless against the Beast so she decides to work a little mojo of her own. Masters gets Angie and Chas to sit in a circle and orders them to clear their minds.

The Beast continues to strike at Constantine, taunting him about his immanent failure and decides to return his attentions to the three humans hiding out in John's lock-up. Gemma tells Chandler and Spatchcock to think about a dog, a big friendly dog, a dog with Scooby-Doo's charisma, Lassie's brains and Krypto's...before she can finish, all three are possessed by the Beast.

Revelling in its success, the Beast gloats over Constantine but finds his celebration cut short with the sudden appearance of the heavily armoured Swamp Thing. John gets a little sneering of his own in and the Beast reacts with anger, casting Constantine into a gaping pit in his own consciousness. The Swamp Thing tears through the Beast's tendrils, ripping it to pieces.

Distracted by the Swamp Thing's sudden assault, the Beast momentarily loses control of Gemma, allowing her to complete her final thought and let loose the thought of a giant dog into the human consciousness.

The Beast strikes back, plucking the human soul that lurks deep within the earth elemental free and tossing it aside. No longer connected to humanity in any way, the Swamp Thing is unable to remain in the collective consciousness to wage war against the Beast. Assured of its victory, the Beast turns his attention back to mankind but gets a nasty shock as Masters' rogue thought runs through the linked consciousness of humanity, giving birth to a new Shadow Dog. Defenceless against its ages old enemy, the Beast falls before the Shadow Dog's attack.

The Swamp Thing returns to the lock-up and is furious with the fact that he was merely a distraction in Constantine's plan. The elemental tells Gemma to inform her Uncle that his plan cost the Swamp Thing something he did not need....at which point, Chas notes that John appears to have done a runner and is nowhere to be found.

On the still burning streets of London, a group of paramedics stumble across a man who's lost his memory. A man who looks an awful lot likeJohn Constantine.