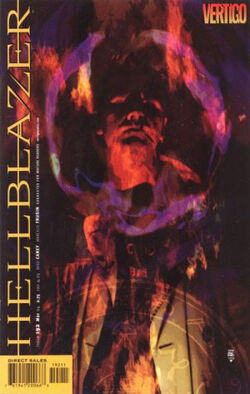 John Constantine: Hellblazer #192 (March 2004) Solicitation Text : Part 4 of the 5-part “Staring at the Wall.” Humanity is in the maw of the Beast, the cities of the world are on fire, and John Constantine is somewhat worse than missing in action. With all other options gone, it falls to Gemma to pick up the pieces — but to the Beast, Gemma is another vessel for the taking.

Chas Chandler drives his cab carefully through the burning streets of London, with Gemma Masters and the comatose body of his old friend John Constantine sitting pretty in his back seat. En route to John's lock-up in Streatham, the trio stop outside a flower shop where Gemma indulges in a little looting, making off with a potted plant, much to Chas' confusion.

Arriving at Constantine's lock-up, Gemma is taken aback by the myriad of strange artifacts she finds within. Regaining her composure, she gets Chas to lay the prone form of John's body in the middle of the room before placing the stolen pot plant beside his head. The plant shifts and grows into the towering form of the Swamp Thing. Chirpy as ever, the elemental makes a point of stating that he wouldn't have come where the stakes not so high before placing his hand over Constantine's face, green roots spreading up into John's nose and down through his mouth into his throat. Well and truly on edge, Chas looks to make a quick getaway but Masters has other ideas, she needs the hapless Taxi driver to pick her up a few things from the remains of the city. The Swamp Thing tells Gemma that he's keeping John's lungs breathing and his heart beating, essentially keeping Constantine alive.

Berlin. Lima. Los Angeles. All suffer under the yoke of the freed beast as the Lord Lucifer looks on, deigning not to interfere as it is not his world that is being torn asunder.

Back in the lock-up, Gemma goes through John's library of magical tomes, hoping to find something that can assist her in the task ahead. With the required book in hand, Gemma reveals that she plans to cast a spell. The Swamp Thing lends a helping hand by providing her with one of the required ingredients, the leaves form a Nightshade plant. Chas arrives back with the rest of the materials required for the spell and Masters wastes no time in getting to work.

Tim Hunter stands overlooking the carnage in Hackney. Anxious to take up his responsibilities as this age's Merlin, he casts a spell to divine the source of the chaos that grips the world. Hunter is confused when his spell shows that the cause of the destruction lies within him. The Beast seizes the stunned Tim, gloating that he's in the heart of all mankind. Hunter is left sprawled unconscious on the floor.

With her strange concoction completed, Gemma leaves Chas to stand watch outside the lock-up before knocking the liquid back. Masters loses consciousness and finds herself crouched before the towering visage of her Uncle John Constantine. Getting to her feet, she walks in past his giant yawning mouth.

Elsewhere, the Beast grows tired with its games and decides to bring everything to a close. With a thought, he brings the entirety of mankind to its knees and prepares to kill them.

In a hidden part of John Constantine's consciousness, Gemma comes face to face with her uncle. Shirtless and wielding an axe, Constantine is busy chopping at tendrils that sprout up all around him. The pair exchange harsh words over their last meeting but John has no time to indulge in petty bickering and reminds his niece that things are well and truly fucked. Constantine explains that he flatlined in order to protect his consciousness from the Beast. With the Beast now trying to smash his way inside of John, Constantine is hoping that it hasn't noticed the safe zone he's managed to place around Chas, The Swamp Thing and Gemma herself. He's got a plan, y'see ?

Chas tries to phone home but finds that he can't get a signal on his mobile phone. With the world of mankind near its end, he decides that he wants to spend his dying moments with his family but, as he turns to leave, something starts thumping against the lock-up's door.

Constantine sets about explaining his plan to Gemma, musing that the Beast told him that Adam set the Shadow Dog on it in the first place, but before he can get any further his niece disappears. Masters comes to in the real world where an anxious Swamp Thing asks her if she managed to get in touch with John's spirit. Gemma laughs and speaks in the voice of the Beast, mocking Constantine's failed attempts as Chas plucks a shotgun off a nearby shelf. Chas, also speaking with the Beast's voice, finishes Gemma's sentence, cocks the shotgun and blows the Swamp Thing's head off.

Masters crouches over her unconscious Uncle's body and presses a razor blade tight in against his neck.