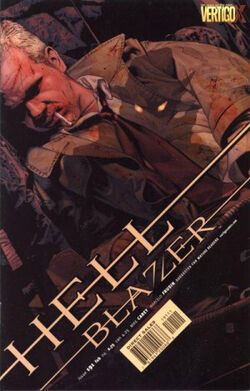 John Constantine: Hellblazer #191 (February 2004) Solicitation Text : Part 3 of the 5-part “Staring at the Wall.” The Beast is burning its mark into the world, and John Constantine's fragile coalition has fallen apart in death and recrimination. It looks as though John's fortunes have finally reached rock bottom. But when he faces the Beast in its lair, things get unimaginably worse.

Father Peter Atwell's planned sermon takes a turn for the demonic when his congregation submit to the will of the freed The Beast. The third door is down, the Shadow Dog is dead and humanity's collective consciousness is now the Beast's playground. Atwell's possessed parishioners swarm over the terrified priest, leaving him crucified in the middle of the church.

John Constantine seeks refuge in The Cutter Pub, knocking back chaser after chaser, rebuking the efforts of a concerned barman who tries to slow his alcohol consumption. Lost in self-pity and the warm sting of booze, John thinks back to the final moments he spent in the house where he inadvertently set the Beast loose. Furious with Constantine's disastrous error, the surviving magicians wasted no time in storming out on the Englishman. Back in the pub, John's best efforts at drinking himself under the table are cut short when the Beast possess the staff and patrons around him. The Beast taunts Constantine with the knowledge that he's going to be the last to fall before tossing him through the nearest window.

Lying on the street, John once again thinks back to his final moments in the house. With the last of the magicians gone, The Phantom Stranger decides to pop by for a visit. He scolds Constantine for being so quick to act and too slow to question what he was being told. John's anger at his own failings are met with scorn by the Stranger.

Back on his feet, Constantine wanders through the streets of London. The Beast delights in sneering at the dejected magician, possessing some nearby humans and forcing them to set each other alight as he passes.

John thinks back to the final events that transpired in the house and his parting with Angie Spatchcock. Finding her crying over Jason Spatchcock, Constantine approaches and tries to absolve himself of blame - pointing out that Jason was dead before they even met, killed when the dead came through the door at Stone Cross (Hellblazer issue 182, Hellblazer issue 183). John consoles Angie, promising to bring down the creature responsible for Jason's death but she's less than impressed and lashes out, kicking him in the balls, leaving him crouched in pain at her feet. Angie acknowledges that she had a big part to play in her brother's death - afterall it was her that wanted to go with Constantine in the first place - but she wants no more to do with him. She storms out, leaving him alone.

A new problem seems to warrant a familiar solution, as John sits alone, a razor blade in hand and a bottle of whisky nearby. Constantine takes the blade to his wrists and slashes them open. Losing consciousness, John finds himself face-to-face with the demonic visage of The Beast. Again the creature confronts him with his failings, saying that they now sit where all minds touch, leaving mankind at its mercy.

Elsewhere, Gemma Masters tries to pawn off some jewellery she managed to swipe from Domine Fredericks. The pawnbroker isn't overly impressed when he recognises some of the pieces as ones he sold to Scrape Gillis for his private collection. Angered, he grabs Gemma's arm and says he's going to call the police... but then his eyes roll back up into his head and his voices changes to sound an awful lot like.... her Uncle John! Speaking through the possessed pawnbroker, Constantine manages to issue a garbled command "Vivimancy. You're gonna have to raise....".

The Beast revels in its success, telling John that it used the dead man and the Lukhavim to trick him into thinking that the Shadow Dog was the real threat. Constantine grudgingly acknowledges the cleverness of its plan - noting that all of the legends about the Dog would naturally be full of madness and death as it only ever appeared in the wake of the Beast's coming. Wrapping John in tendrils made from fuck-knows-what, The Beast drags the squirming Englishman towards its gaping maw.

Gemma arrives at the bordering house where John was staying, much to the chagrin of the landlady who isn't impressed with her guest receiving female visitors. When no-one answers John's door, she tries to send Masters on her way but the young woman is having none of it and takes a nearby fire extinguisher to the door, knocking it open. Rushing inside she finds her Uncle curled up on the floor in a pool of his own blood.

Retrieved from "https://hellblazer.fandom.com/wiki/Hellblazer_issue_191?oldid=8648"
Community content is available under CC-BY-SA unless otherwise noted.