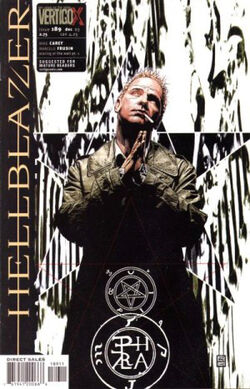 John Constantine: Hellblazer #189 (December 2003) Solicitation Text : Part 1 of a new 5-part story, "Staring at the Wall." Back from his world tour, John prepares for the apocalyptic arrival of the shadow dog - and he's planning to meet it in force. But some of his reluctant allies may have agendas of their own…

Madness sweeps through the streets of the world. A woman forgets twenty years of her life and shoots her husband three times, believing him to be an unwanted intruder in her home. A man doing time in a Stuttgart jail, convinced that the walls of his cell are trying to rape him, lapses into a state of drooling catatonia. A deranged worker at a petting zoo commits unspeakable acts upon the animals left in his care.

Elsewhere, an unknown individual calls six magically adept persons to the crumbling remains of the Blue Thistle hotel. Three of those present are familiar faces - the relaxed figure of Clarice Sackville, the seemingly ageless Ravi and the brooding Map. Also lurking in the hotel are the towering, bulky form of Donatus Chalice of the Closed Order Of The Alexins, the white haired and sunglasses wearing Alba and the scarred smirking Nat Kuhn, also known as Nathan Arcane. Tensions quickly rise between the six, with each wanting to know the identity of the one who summoned them - a question answered when John Constantine arrives on the scene, a dagger in one hand and an engraved human skull in the other.

Angie Spatchcock returns to the Bedfordshire Psychiatric Hospital and receives a pleasant surprise in the form of her brother Jason, who appears to have regained full control of his mental faculties and developed an interest in painting, having just completed the striking portrait of a howling dark beast of a dog. Jason explains that he's now off his medication and that he needs to meet Angie's boyfriend, Constantine, so he can show him his pictures.

Back in the hotel, none of the six are particularly happy at John's arrival and all are eager to learn about the reasoning behind their summons. Constantine isn't forthcoming with any answers, instead making each of the assembled magicians swear on either the skull or the dagger as to their identity. After a little cajoling from John, the six comply, taking it in turns to recite their names whilst holding one of the two relics, during this ritual we learn that Map's real name is Ken Ondaatie.

Meanwhile, Jason talks to his sister about the events that led to his return to mental health, explaining to her that he was fully conscious of his environment whilst possessed by the Celtic spirits. Indeed, he was able to hear what his possessors were thinking, about the door they escaped through and the creature that came with them - the Shadow Dog.

The madness continues to wind its way across the world. A Spanish librarian guts himself live online, living just long enough to explain to the medics who rush to his aid that he's dying for the sins of the world. One of the medics breaks down in tears, the other comes to the somewhat logical conclusion that more deaths would redeem an even greater number of sins. In Ohio , a young girl reads a story in class that leaves eighteen of her fellow students in need of counseling. The madness now has direction, making its way slowly towards Bethlehem. In the depths of a rain swept swamp, a solemn elemental stares out across the world.

John Constantine tells his agitated audience about the Shadow Dog and how, having never been named by Adam in the Garden Of Eden, it can take any form it wants. Constantine warns the magicians that the Shadow Dog is near before going on to tell them about Domine Fredericks failed attempts at opening the three doors with the Red Sepulchre and his trip to the Vatican where he learned that every prophet, seer and second rate Nostradamus wannabe had something to say about the three doors - none of it good. Ravi points out that Fredericks failed to open the doors but John counters, telling him that something managed to rip its way out of the land of the dead a few short weeks after Domines' unsuccessful efforts. Constantine continues, telling those present that others have come close to opening the doors in the past - on each occasion causing an epidemic of madness and slaughter so terrible that they were edited out of history. John reveals his plan to the magicians, telling them that he needs their help to trap and kill the Shadow Dog.

Jason catches forty winks on a London bound train as his sister looks out across the landscape speeding by. When the shadowy form of a huge dog appears on the horizon, she cuts her finger and smears a sigil of blood on the window of the train carriage. The Shadow Dog howls and disappears.

Clarice consoles John, whose efforts at convincing the magicians to help him appear to have fallen on deaf ears. Ravi interrupts the pair but his apology to Constantine is cut short when a scream echoes from the next from. Rushing in, the three find Alba screeching hysterically at Chalice. Insane with rage, Alba uses magic to skewer the hulking Chalice with two swords, leaving him dead on the floor in front of her. Alba turns her attentions to John but Map intervenes, using his own magic to knock her unconscious.

Jason and Angie arrive at the hotel as John surveys the damage caused by Alba's outburst. Jason warns the assembled magicians that the Shadow Dog will seek to drive them mad before killing them.