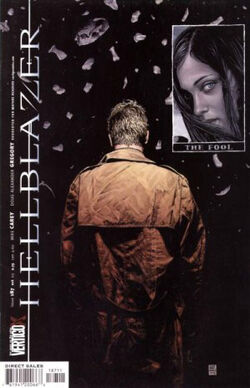 John Constantine: Hellblazer #187 (October 2003) Solicitation Text : Part 1 of the 2-part "Bred in the Bone," featuring art by Doug Alexander. In 1983, off the bleak coasts of Scotland, John Constantine faced and contained an ancient, unnatural evil. But old monsters refuse to lie down, and 20 years later his niece Gemma must deal with the consequences of John's actions.

1983, Gruinard Island. Three men stand together in the murky gloom of the night air. The familiar figure of a slightly youngerJohn Constantine puffs on a cigarette as he addresses his two companions, the shotgun wielding Bentham and the scrawny form of Ghant (last seen working for Fredericks) who carries the remains of a sheep's head. The trio are hunting something mystical on the island.

Now. London, Dollis Hill. Ghant sits across from the broken corpse of a man whose ruined mouth still drips with blood. Is that a clock from Constantine's past on the mantle piece ? Lost in thought, Ghant muses on his torture of the now dead man and the tiny fragment of angel bone it yielded. Ghant's thoughts turn to the final object that he needs to complete his search (for what, we don't yet know) and a little divination with his newly acquired piece of bone points him towards Gruinard.

London, Paddington. Gemma Masters' plan to score some cheap accommodation in a hotel that doubles as a makeshift brothel hits a snag when the police raid the premises. Caught up in the raid, and with her pleas of innocence falling on deaf ears, Gemma ends up behind bars with Delilah, a prostitute who was plying her trade at the hotel. The pair share a brief conversation, with Delilah giving Masters a card with her phone number on it as a police officer arrives to tell Gemma that she's been bailed (the cop calls her "Gemma Constantine", so she's obviously taken to using her uncle's surname for whatever reason).

Gemma leaves the police station behind her, all the while sorting out the speech she's going to give to her Uncle John, her presumed bailer. She's surprised to find that Ghant is her benefactor, and equally surprised to see that he survived the events that took place at Fredericks' mansion not so long ago. Ghant explains that he got a tip off from 'a friend' before Constantine staged his little raid. With the pleasantries out of the way, Ghant tells Gemma that he had a job for her uncle but he's willing to offer it to her - if she's interested. Treating Masters to a free dinner, Gemma tells her that he needs her to help him collect something from up North.

Gruinard Island. A young girl called Beth cries over the corpse of a dead rabbit while cradling one of its young in her arms. A slightly older boy approaches and she turns to face him. She addresses the newcomer as Paul and tells him that she killed the rabbit because "she had the grown up smell". Paul does his best to comfort the distraught girl and suggests that they look after the now orphaned bunnies. Delighted with this suggestion, Beth follows Paul down into a town that's noticeably free of adults.

Ghant's minibus travels north along the M1, with a brooding Gemma slouched in the passenger seat. Eager to prove that she can make it in her uncle's world, Masters plays docile with Ghant, hoping to lure him into a false sense of security. Gemma is taken with the beauty of Gruinard as she watches the sun set behind it from across the water. Ghant tells her that it earned the nickname of Anthrax Island after the Ministry Of Defence used it as a testing ground for an Anthrax Bomb in the 1940s. With night falling, Ghant drops Gemma off at a hotel into which he's booked them as father and daughter before departing to take care of some business on his own.

Left to her own devices, Gemma decides to take a knife to the flimsy lock that holds Ghant's bag shut. Most of the items within fail to catch her interest - a knife, a black bag full of bones, a Ouija board and some condoms - Ghant's diary, on the other hand, is just what she's looking for. Masters reads about Ghant's last trip to Gruinard, and the part her uncle played in the hunt for a creature that fed upon the island's inhabitants.

Ghant arrives at "Bantham's Tackle & Bait" shop and is greeted by the firm pressure of a double barrelled shotgun being pressed in against his cheek. The shotgun wielder, Bantham, warns Ghant that he's written down everything he knows about him and kept three copies in very safe places - should Ghant fuck him over, said copies will surface and cause him all kinds of grief. With the pleasantries out of the way, Ghant tells Bantham that he plans to go back to Guinard and that he needs him to show him where he buried 'her'.

Gemma wakes with a start, surprised to find that she nodded off in the first place. Suffering from painful cramps and with memories of nightmares involving screaming children fresh in her mind, she gets another shock when she pulls on her pants - that now appear to be two sizes to big for her. She's lost a good two stone of weight. Stumbling to the bathroom, a quick glance in the mirror shows that she looks a lot younger now than she did before she went to sleep. Bursting into Ghant's room, Gemma finds him sitting cross-legged in front of the Ouija board she pulled from his bag earlier. The elderly man explains to her that it's a bone abacus, a shaman's tool. He also tells her that he's altered her appearance for her own protection.

Ghant leads a brooding Gemma down to the shore where Bantham, who's been at the booze, waits in a small rowing boat. Masters is convinced that the dreams are an omen, a sign that something terrible happened on Guanard twenty years ago, something that her uncle was partly responsible for.

Beth leads one of her friends up onto a hill that looks out across the water to the mainland and tells her to "Smell it silly. Smell is with your nose". Delighted, the young girl turns to Beth and squeals aloud that there's a boat coming, a boat with two men and a girl on it. Beth turns to her friend and tells her that Paul gets to eat first.