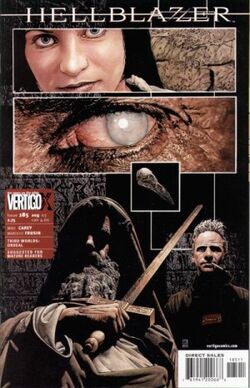 John Constantine: Hellblazer #185 (August 2003) Solicitation Text : In "Ordeal," the second of the linked "Third Worlds" stories, John Constantine meets the children of Cain, faces trial by ordeal, and braves the borders of Eden in his attempt to discover the truth behind the Shadow Dog Legend.

Arriving in Western Iran with Angie in tow, John calls in a favour and ropes an old acquaintance by the name of Salmi into playing reluctant taxi driver. Forced into driving Constantine and Spatchcock to Be'esira, Salmi's reluctance appears to be somewhat contagious as his car's suspension gives out a short way from their destination, leaving John and Angie to finish their journey on foot.

Angie waxes lyrical about recent events, pondering as to how Eden could be on the Iranian border. Constantine points out that their current locale is only one of several on Earth that stands close to Eden. The pair's conversation is rudely interrupted by a group of machine gun wielding locals who take them into their custody and lead them into a small settlement. Brought before an old woman of standing amongst their captors by the name of Ghursoon, it quickly becomes apparent that John has been here before and that he's left a less than good impression in his wake. Constantine is accused of having stolen the testament of the Nephilim from his captors and is escorted away from Angie, leaving her alone with Ghursoon. The old woman notes that Angie's name (Angela) means "messenger of God" before musing as to what it means to fight and die for God. Her words of death and sacrifice don't really strike a chord with the younger woman.

Shackled and beaten, John is confronted by a young woman named Beriti who accuses him of having used her in some way, with Constantine implying that the two have slept together. Angie arrives on the scene as she lands a swift kick to the bloodied John's face. The aggrieved woman takes flight and Spatchcock is left aghast at the extent of John's beating. Shrugging off his wounds, Constantine explains that his captors see themselves as the direct descendants of Cain and that they wait at the gates of Eden for their pardon. John tells Angie that he will face trial by ordeal to determine whether or not he is guilty of the theft of the Nephilim testeament. Constantine asks Spatchcock to bury a clump of his hair in the Garden of Eden.

Angie makes her way to the garden, with thoughts of her family tree playing on her mind. Her dad was a cleaner, her mother a cleaner at a metal box factory, her brother Jason is 'touched in the head' and there "hasn't been a wedding in the family for three generations where the bride wasn't at least three months gone".

Ghursoon pays a visit to John, warning him that if he tries to use magic in the settlement she will stop him. When asked for the reasons behind his visit to the settlement, John tells her that he wants to hear her tell the story of Eden. Angie ventures into the Garden of Eden and sets about burying Constantine's hair, only to be confronted by the towering form of a robed angel wielding a flaming blade. Ghursoon speaks to John of a beast that fled the Garden in the wake of Adam and Eve's departure, a creature that "screamed when it was named". To Constantine's frustration, the old woman is unable to provide the beast's name. Spatchcock's confrontation with the angel takes a surprising turn when, instead of striking her down, it hands her a branch.

Back in the settlement, John faces his trial by ordeal. Constantine plunges his forearm into a cauldron of boiling water while declaring his innocence. John pulls his unscathed arm from the cauldron, thus proving his innocence to Ghursoon. Angie takes a moment to floor Beriti with a stringing right hook before leaving the settlement with Constantine. Before Spatchcock's can tell John about the angel in the garden, the magus collapses in agony, his forearm a mess of ugly blisters. Constantine tells her that he used meditation to keep the temperature down when he drove his arm into the cauldron, convincing his body that there was no boiling water there, a short term trick for which he was now paying in full.

The pair make camp in the wilderness for the night but Angie finds herself unable to sleep, so she's wide awake when the Swamp Thing - wearing a new cactus derived look - wanders into view. Somewhat taken aback by her first meeting with the plant elemental, she sits stunned as the creature converses with John. The Swamp Thing tells him that six days prior, "something very big came from the subtle realms into the world of flesh." and that "something much smaller…but still bigger than a man…followed it two days later". According to Swampy, this happened once before, two hundred years ago in Tasmania.