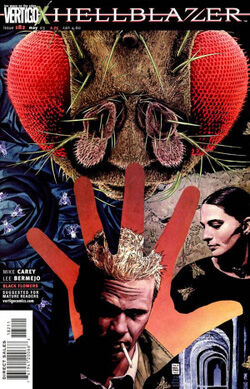 John Constantine: Hellblazer #182 (May 2003) Solicitation Text: "Black Flowers" Part 1 of 2. A supernatural visitor warns John that the border between the worlds of the living and the dead is crumbling. Something has to be done - and quickly - but John doesn't see why it's his problem…until he learns that a friend is in the line of fire. Featuring the return of Angie Spatchcock.

Four teenagers steal into the basement of Bedfordshire County's St. Peter's Psychiatric Hospital for a spot of occult sightseeing but get far more than they bargained for when they come to an apparent (off-camera) end.

Elsewhere, Angie finds her enjoyment of a punk rock concert cut short when a psychic alarm wrecks havoc on her stomach. Convinced that this is a sign that her brother Jason, who's in a hospital down south, is in trouble she flees the gig with Leon, her bemused date for the evening, in tow.

Strange dark shadows drift through the corridors of St. Peter's Psychiatric Hospital, sparking the patients left in their wake into a violent frenzy. Some go so far as to kill themselves, others are more content to take the lives of the hospital staff.

Pressed into Taxi service, Leon comes over all-amorous but gets naught for his efforts but a face full of Angie's boot and the loss of his wheels. Her date abandoned and firmly ensconced behind the wheel of Leon's car, Angie speeds off into the night.

Dawn breaks and strange black flowers bloom in the grounds of St. Peter's as a hapless postman learns first hand that all is not well within the walls of the psychiatric hospital .

John Constantine's morning shave is interrupted by the arrival of a large, lumbering insect like demon in his living room. Introducing itself as an emissary of King Arawn Pen Annuvin, the demon informs John that there is a disturbance on the border (of what ?) that just happens to involve the woman that Constantine has been dreaming of as of late - Angie Spatchcock. The demon's master wants John to find the location of the disturbance.

In Bedfordshire, the shadows leave the hospital behind them and wind their way down into the town proper, again leaving those they pass gripped in a violent rage.

Foregoing more traditional methods, Constantine uses an empty box of Silk Cut and a biro to invoke some magic and divine that the location of the disturbances the demon has warned him of is... Bedfordshire.

Angie arrives in Bedfordshire and makes her way up towards the hospital after spying the patrons of a nearby bar fighting and rutting like animals.

John refuses his demon visitor's offer of a lift but with Chas' wife keeping him well away from Constantine after recent events, John is forced to rely on his best mate's motorbike riding friend, Kev, for transport.

Her head clouded by the sound of strange singing voices, and surrounded by the black flowers that have sprung up all around the town, Angie stumbles onwards towards the hospital. Finding the gates of the hospital locked, she scales the wall around it, landing heavily on the other side and noting for the first time that her hands are a mess of tiny marks - as if she'd been bitten by lots of small teeth.

Stopping en route to Bedfordshire, Constantine finds the half-eaten corpse of a rabbit amongst a bunch of black flowers. Looking closer, the flowers are akin to miniature Venus flytraps, their open maws lined with tiny teeth. John reveals that Arawn is the King Of The Dead.

Staggering through the grounds of the hospital towards its front door, Angie comes faces to face with a robed, masked figure wearing a chained belt adorned with hooks and clutching a shepherd's crook.