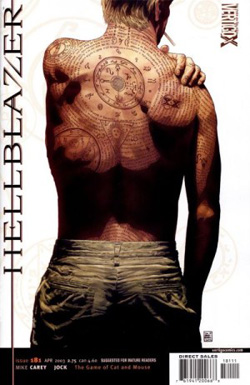 John Constantine: Hellblazer #181 (April 2003) Solicitation Text : After an ambiguous tip-off from a dead informant, John Constantine takes steps to protect himself against a demonic attack. But when the ambush comes from an unexpected direction, his magic defenses fail him, and the only thing he has to fall back on is his knowledge of darkest London.

The here and now... A panicked John Constantine flees from unseen pursuers through the streets of London... and passes quite literally through a woman who seems blissfully unaware of his presence... John appears to be in a non-corporal form.

Twelve hours earlier... Inspector Watford introduces Constantine to the charred remains of a corpse that claims to be possessed by the spirit of Gary Lester . The corpse tells John that three Lukhavim have been summoned from hell by friends of Domine Fredericks who are eager to avenge his death at Constantine's hands. As the spirit is pulled from the corpse and dragged back down to hell, it warns John "Stay alive. It's important. If you die, then..." before going quiet.

The here and now…disorientated in Wapping, Constantine takes a moment to regain his bearings before leading his still unseen pursuers into contact with a number of ghosts that lurk down by the Thames river. John tries to warn the ghosts about the creatures that chase him but finds that his non-corporal form has robbed him of his voice. Caught unawares, the ghosts are destroyed by Constantine's pursuers.

Six hours ago…Clarice inscribes a number of mystical symbols on John's back, claiming that they'll protect him from the Lukhavim. Constantine wonders if , given the part he played in Lester's death, he should trust the words of his spirit before explaining to Clarice just what the Lukhavim are : vicious monsters made from dead souls.

The here and now…hiding in Whitechapel, John is caught unawares when a clawed arm materializes through a wall behind him and tears a large chunk from his shoulder. Constantine again takes to his toes and sprints off through London.

Two hours ago…Chas arrives home from work, intent on grabbing a quick cup of tea before taking his taxi back on the road. Wandering into his living room, Chas comes face to face with his wife, young granddaughter…and the two hulking forms of the Lukhavim that flank them. The creatures interrogate the hapless Chas about his relationship to John, threatening to do dire things to his family should they not like his answers to their questions.

The here and now…still on the run, with two of the Lukhavim snapping at his heels, Constantine uses his indebt knowledge of London to stay one step ahead of the beasts. Figuring that because his pursuers could touch the ghosts by the riverside that they in turn can be touched by ghosts, he formulates a plan of attack before sinking his astral self through the streets of London.

Thirty minutes ago…after receiving a frantic phone call from Chas, John arrives at his best friends garage. An apologetic Chas emerges from the debts of the building with a pair of Lukhavim in toe. When Constantine asks the two creatures about the location of the third Lukhavim they claim to know nothing of it. Clarice's inscriptions prove somewhat effective against the beasts until one of them casts a spell that knocks John's soul from his body…leaving him trapped in a non-corporal form.

The hear and now…John finds his voice and taunts the pursuing Lukhavim. Constantine leads the pair into Liverpool Street station where they're attacked by a horde of ghosts. John explains that the station was built on the site of the old Bedlam lunatic asylum.

The Lukhavim make quick work of the attacking spirits… but are delayed in the station long enough to suffer the faith intended for them by Constantine. The "Bedlam" name was actually short for "Mary Of Bethlehem" - originally it was a chapel attached to a priory - John has tricked the demons into walking on consecrated ground. The creatures from hell are quickly rent asunder for this foolish transgression.

Guilt-ridden at having fed the hapless ghosts of the insane to the demons, John wanders outside and runs right into a third Lukhavim. Instead of attacking Constantine though, the creature delivers a message before disappearing - "The dog is pressing against the first door".

Retrieved from "https://hellblazer.fandom.com/wiki/Hellblazer_issue_181?oldid=11201"
Community content is available under CC-BY-SA unless otherwise noted.