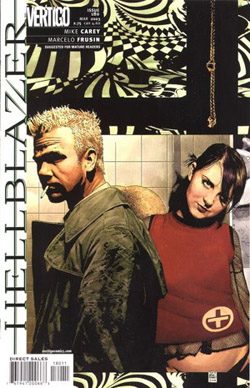 John Constantine: Hellblazer #180 (March 2003) Solicitation Text : "The thrilling conclusion to "Red Sepulchre!" The Cold War has turned red hot, and Constantine has been forced to take sides. But when he surrenders the sepulchre to Domine Fredericks, the balance of power shifts, and old friends - as well as old enemies - finally get what's coming to them.

Standing outside the still smouldering remains of Albert's apartment, Joshua Wright decides to leave John Constantine under the watchful gaze of Peake while he ventures inside to confirm that Clarice has come to a messy end. With Joshua out of sight, Constantine indulges in a little small talk, revealing to Peake that the Sepulchre is actually the drawstring on the Russian sailor's dufflebag before kicking him square in the balls and making off with his mobile phone and car keys. Inside the gutted apartment, Joshua learns that he's been tricked and that neither Albert nor Clarice is present.

Map makes his by now usual disembodied appearance to Albert and Clarice, telling them that he used magic to trick Joshua Wright into thinking that they were in another apartment, the building that was subsequently blown up by Wright. Explaining to the pair that they are now in debt to Constantine, he lays out the part they have to play in John's latest endgame.

Buoyed on by her uncle's stinging words, Gemma confronts Fredericks about his real reasons for taking her under his wing. Domine slaps the young woman off her feet and admits that his sole interest in her was her connection to the Sepulchre. He goes on to state that once it was proven that she had no link to same, she was of little real use to him - except as a means to blackmailing John Constantine. Fredericks has Gemma tied to a chair and her mouth taped shut.

Racing on foot through the streets of London, Wright and Peake stop at a phone box to warn Goodall that Constantine is on his way back to the mansion. The lights in Goodall's wing of the mansion go out as Joshua hangs up and orders the knackered Peake to find him a car. Returning to the storeroom, Goodall finds the drawstring from the Russian sailor's dufflebag lying in a small pool of blood. John appears in the doorway of the storeroom as the ghostly image of Kali posses Goodall.

Elsewhere in London, Clarice, Albert and Map bust out the Latin chants and make with the old school magic.

Back in the mansion, Constantine and Fredericks come face to face once again. Domine confronts John with the small hand mirror in which he has bonded Gemma's essence - warning him that if he breaks the mirror, a dire faith will befall his niece. Constantine treats Fredericks to a history lesson, telling him the history of the Sepulchre and explaining how it can be used to invoke a beserker rage in someone when used as part of a spell that involves exposing it to blood.

Joshua and Peake arrive back at the mansion, just in time to run straight into the possessed Goodall. Springing into a violent rage, Goodall attacks his two former workmates - breaking Wright's neck and gouging out Peake's eyeballs with his thumbs.

His patience worn out, Fredericks demands that John give him the Sepulchre but before Constantine can comply, Gemma losses consciousness and causes her chair to tilt over, leaving her comatose on her side. The still raging Godall crashes through a nearby window and quickly disposes of Fredericks, causing the hand mirror to smash to pieces on the floor but Domine's spell appears to dissipate harmlessly. John uses some magic of his own to halt the rampaging Goodall before burning the Sepulchre and leaving Fredericks' mansion with Gemma in his arms.

Later, at the funeral of one of the men killed during Wright's assault on The Tate Club (and later used by Clarice as part of her demon summoning spell), John and Clarice meet to discuss recent events. Constantine appears to have forgiven her for the part she played in Gemma's abduction but concedes that his niece is still pissed off at him. It turns out that the spell being worked by Albert, Clarice and Map was used to protect Gemma from Frecericks' binding spell.

Eager to learn why Domine wanted the Sepulchre in the first place, Constantine quizzes Albert and Clarice. The pair tells him that Fredericks planned to use it as part of a blood sactifice to open one of three doors - the first of said portals being the one between the worlds of the living and the dead. Albert also tells John about the nightmares Domine was having about The Shadow Dog before Constantine takes his leave.