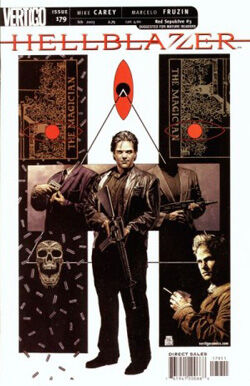 John Constantine: Hellblazer #179 (February 2003) Solicitation Text : "Red Sepulchre," Part 3 of 4. The bond that ties Constantine to the red sepulchre is revealed at last. But John is caught between two evils: a demon imprisoned in dead flesh and the sadistic mage named Josh Wright. To get both himself and his niece Gemma free, he may have to sink a knife into an old friend's back.

Sitting in a bandstand located on the grounds of Fredericks' manor, John Constantine explains his family's connection with the Red Sepulchre to the Zimbabwean occultist. The connection in question actually rests on John's mother's side of the family tree, the Quinns. Back in the 1840s, Aloysius Quinn - a member of the British army stationed in southern India - was lured into the clutches of the Phansigar ("The Deceivers) cult.

The leader of this cult, with the aid of one of his followers, tried to kill Quinn with the Sepulchre. Thinking their efforts to have been successful, the pair tossed Aloysius' prone body into a well piled high with the corpses of their previous victims. Quinn was found three days later, raving like a mad man and stinking of gangrene - he lost an arm and a leg but survived to tell his tale to any who'd listen. Aloysius lived to be an old man but insisted that his soul was bound to the Red Sepulchre - that only his mortal coil had made it back from India.

Suitably satisfied with John's story, Domine agrees to allow him some time alone with his niece. Rather than appearing somewhat traumatised by her current incarceration, Gemma is delighted to be mired so deep in her Uncle John's world. When Constantine confronts her with the cold hard facts of her situation - that she's nothing more than a glorified hostage of a man who put her family in serious danger - Gemma loses her temper. She accuses John of being afraid of the competition she can offer him in the "family business" and claims that Fredericks is teaching her how to use her talent for magic.

Elsewhere in London, a rampaging demon finds its freedom curtailed when Clarice reveals that it is bound to the corpse that she used to summon it. As the body rots, so does the demon - unless Clarice deigns to release the creature, it will eventually be destroyed. Enraged but with little option, the demon agrees to do her biding.

Back in the storage room of Fredicks' mansion, Constantine reads through a list of the items taken from Gillis' shop before it was burned to the ground. John tells the two men ordered to help him to divide the items on the list into two piles - one containing everything that could be a weapon, the other containing everything that could not. Constantine has a quick rummage through the apparently empty duffel bag of the now dead sailor who claimed to be in possession of the Sepulchre before tossing it aside.

Domine Fredericks meanwhile, finds his sleep plagued with nightmares of a giant wolf that stalks him as his naked body burns in the darkness.

Outside, a strange man approaches the front gates of Frederick's mansion. When confronted by two of Domine's guards, the man claims to have a message for Fredericks and Constantine before revealing his true form - that of the demon summoned by Clarice - and slaughtering the two guards. The creature wastes little time in tearing down the gates and marching onwards to the mansion itself.

Inside, the sounding of the mansion's alarm causes the two guards working with Constantine to rush off, leaving John all on his lonesome. Standing in front of a large mirror, Constantine calls on Map, whose giant visage dutifully appears in the reflective surface. John suggests the pair work together, using something along the lines of "Gutta Inferna, or the stolen light dodge" to trick both Fredericks and Joshua Wright (into believing what, remains to be seen). Map surmises that the best way to stop Domine would be to kill Constantine but the pair manage to come to a strained alliance nonetheless.

Clarice's demon tears through the ranks of Fredericks' men as it makes its way deeper into Domine's mansion. When Joshua arrives on the scene, he orders the two remaining guards (coincidentally enough, the two men who had been watching over Constantine) to turn their fire on the bloody corpse that follows in the wake of the creature. Riddled by automatic gunfire, the corpse is soon little more than a few scraps of rotting flesh - the vessel to which it was bound now destroyed, the demon is wiped from existence.

Fredericks is less than pleased when Joshua reveals that neither Clarice nor Albert was found amongst the dead after the attack on the Tate club. Wright further surmises that Clarice must have been responsible for summoning the demon that attacked the mansion. Joshua threatens Constantine with grievous consequences for his niece if he doesn't help them to find the in-hiding Clarice. John guesses that she's in hiding in Albert's place and agrees to lead Joshua and one of the guards to them.

Aware that her demon has been destroyed, Clarice bemoans her failure to the ever attentive Albert. The pair's conversation is interrupted when Albert's phone rings. Confronted by the angry voice of Constantine, a tearful Clarice tries to convince the magus that they need to talk but instead finds her betrayal of Gemma's whereabouts thrown in her face. At John's insistence, Clarice looks out the nearest window, just in time to see a hand grenade smash through it and explode within the cramped confines of Albert's living room.