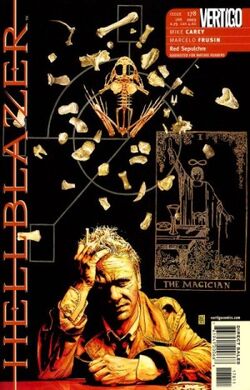 John Constantine: Hellblazer #178 (January 2003) Solicitation Text : "Red Sepulchre" Part 2 of 4. With Gemma Constantine in the palm of his hand, Domine Fredericks is in a position to dictate terms to John: so now he's moving to eliminate the rest of the competition. As sorcerous warfare erupts on the streets of London, Constantine struggles desperately to find out what game is being played out, and whether he himself is prize or pawn.

Surrounded by the boxed contents of Scrape's stock, Fredericks and Joshua discuss their ongoing search for the Sepulchre. Fredericks questions a sullen Wright about his knowledge of John Constantine.

Elsewhere, the patrons of the Tate Club receive a nasty shock in the form of a brutal attack on the establishment. When a hail of petrol bombs set the club alight, the panicked customers flee out onto the street - where Joshua Wright and a hail of automatic gunfire meet them. Albert leads Clarice down a nearby drain pipe and out into the relative safety of a back alley behind the club.

Alone in his room, John watches the remains of the mysterious video tape that was delivered to the guest house. Speaking on the tape, Gemma tells her uncle that the people she is with (willingly or otherwise) are searching for the Sepulchre, an item connected in some way to the Constantine lineage. She finishes by passing on a message to John - that the person in charge of the men who flank her wants to meet him for breakfast at the Savoy.

Back in the alley outside the Tate Club, Albert uses his magic to smuggle Clarice past the men responsible for the attack on the establishment. The pair recognise the attackers as men under the employ of Fredericks and come to the conclusion that John is somehow connected to the assault on the club. Clarice wonders if maybe she should have been more open with Constantine but Albert is less sure, pointing out that they delivered Gemma to Fredericks, a fact that was not likely to paint them in a favourable light to John. Having come to the decision that she needs to carry out a summoning, Clarice gets Albert to bring one of the bodies from the club with them as they depart the scene.

Morning breaks and Constantine arrives at the Savoy, where he's met by Fredericks. The pair exchange barbed words, with Fredericks telling John that he has bound his niece by magic and that he can kill her at any time, Constantine in turn warns him not to harm Gemma. John dismisses Fredericks' interest in the Sepulchre as a waste of time, insisting that the item is a myth. Nonplussed, Fredericks recants the tale of Scrape Gillis and the Russian sailor that he took as a lover who claimed to be in possession of the Sepulchre. When the sailor offered to sell Scrape the object for five hundred thousand pounds, Gillis went to several notable figures in London's magical underworld to secure the money. Fredericks himself covered a fifth of the cost. It was Joshua Wright who killed the sailor at Scrape's shop before murdering the proprietor himself. Fredericks.orders Constantine to move out of the guesthouse and into his own mansion. Perusing a business card left by the fat man, John learns that his first name is "Domine", which again ties back to Gladys' dying words.

In the depths of Fredericks' mansion, an aging magus tortures the soul of Scrape Gillis, plunging it down into the fifth circle of hell when it refuses to answer the questions put to it. Joshua Wright arrives on the scene to inform the magus, whose name we learn is Ghant, that John Constantine is now working for them and that they no longer need the help of Scrape's spirit. Somewhat disenchanted, Ghant leaves Gillis trapped in hell.

Safely seconded in Albert's place, Clarice prepares to carry out her summoning, foregoing the usual magical paraphernalia normally associated with such a task she decides to go with the bare bones approach. John's efforts at enlisting Angie's aid over the telephone come to naught as he finds the harsh words he left her with coming back to bite him on the ass. Map's disembodied head makes another appearance, again warning Constantine against disrupting the balance and siding with Fredericks.

Clarice succeeds in summoning her demon, but her back to basics approach has left the creature unbound and free to do what it would. John arrives at Frederick's mansion and is less than pleased to find that Joshua Wright is working for the man who holds his niece. Obviously enjoying the reversal in roles since their last meeting, Wright reveals that they have the Sepulchre, they just don't know what it looks like!

Joshua leads Constantine to the room containing Scrape's stock, apparently expecting the magus to pull the Sepulchre from amidst the massed ranks of cardboard boxes stuffed to the brim with all kinds of old junk.