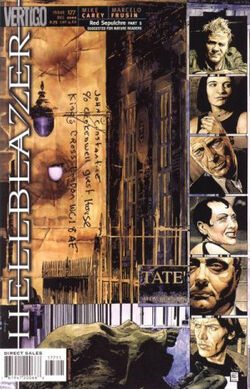 John Constantine: Hellblazer #177 (December 2002) Solicitation Text : "Red Sepulchre," Part 1 of 4. Back in the Smoke for the first time in two years, John has walked into the middle of an ugly range war between rival groups of magicians. Like it or not, he's going to have to choose a side; and it would help if he knew which faction wants him dead.

Nicholas "Scrape" Gillis receives an expected late night caller at his antiques and oddities shop. After sharing a passionate kiss with his Russian visitor, Scrape asks if he's bought "it" with him. The new arrival barely has time to confirm that he has before he starts bleeding from the eyes, ears, nose and throat. A shocked Nicholas is left looking on in horror as off camera voices inform him that they wish to change the terms of their agreement...

An annoyed, and now clean-shaven, John Constantine stands in front of the burnt out remains of Scrape's shop in London. Accompanied by long term friend, and oft time chauffeur, Chas Chandler, Constantine takes a quick look inside the gutted shop before bemoaning Scrape's apparent death. John informs Chas that Scrape was more of a magical broker than an antique's expert, with his shop serving as a convenient front for his operation. After suffering the brunt of what passes for Chas' wit, Constantine borrows the taxi-driver's mobile phone to make a call to persons unknown.

Elsewhere, in the palatial confines of a stately English mansion, Joshua Wright (who's had a haircut since we saw him last) informs his large, bald boss that Constantine is alive and that he's had the "bitch" go through another lot of boxes. The conversation between the pair also reveals that Scrape is apparently still alive and being tortured at their hands but has so far refused to tell them whatever it is that they wish to know.

En route to Tate's, an occult meeting place, in Chas' taxi, John explains how Gladys' dying words led to his seeking out Scrape. Convinced that the old woman was involved in the abduction of his niece, Constantine believes that the clues he's discovered as to Gemma's whereabouts were so obvious that he was meant to find and follow them down to London. Leaving Chas to his continued attempts at learning French through language tapes, Constantine enters Tate's to meet with Clarice. The old woman introduces John to Paker, the owner of the club and explains how Scrape was buggered and beaten to death by a Russian trawler man but doesn't seem overly enthusiastic in answering any of John's questions. Taking the hint, Constantine leaves his address before going on his way.

With Clarice doing her best impression of a deaf, dumb and blind girl, a reluctant John heads into the London underground in search of Map. The powerful Tube dweller refuses to acknowledge Constantine's summons however and all the magus receives for his troubles is a face full of glass as a nearby monitor explodes all over him. A few cuts and bruises not withstanding, John is fortunate enough to escape Map's not too subtle rebuke relatively unscathed.

In an unknown location, a group of well dressed men and women - including Clarice and Paker in their ranks - meet to discuss John Constantine's latest return from the grave. Clarice makes mention of a "Sepulchre" that the group appears to be interested in but proffers the opinion that John has no interest in using it. Another member of the group makes reference to Constantine's run in with the Coopers (during Garth Ennis' Son Of Man arc). Yet another suited gentleman believes that Constantine's appearance means that someone by the name of Fredericks will no longer have a need for any of them.

John returns to Scrape's shop and tries to summon the shade of the man he believes dead. When his efforts meet with little success, Constantine surmises that the antique's dealer is still very much alive, at least for the time being.

As two of the large, bald man's men go through Scrape's possessions, Joshua arrives and reassigns the pair to a task he believes to be more suited to their regular line of work.

Walking alone through London, Constantine passes a man who is surprised when he answers his mobile phone to find the person on the other end asking for John. Constantine takes the phone from the confused stranger and the caller tells him to duck. John drops to his knees and tries to drag the phone's owner down with him but he moves too slow and the unfortunate stranger's head is struck by a blazing streak of flame. Two men, armed with flick-knives and coshes, come out of the shadows and attack Constantine. John manages to punch one before the pair gain the upper hand but before they can do away with the magus, they're both shot dead.

Covered in blood, and badly shaken, Constantine returns to the guest house in which he's staying. The land lady accosts him on his arrival, giving him a package addressed to "John Constantine", even though he booked in under his Collier alias. When Map's giant, disembodied head appears in his bedroom it's clear that John is having one of those days. Map warns John that the package contains a video tape that may well place the pair on different sides of a brewing magical gang war.

Playing the tape in question, Constantine is shocked when it shows Gemma, flanked by two men in suits. One of the men holds a bloodied dagger, the other a chicken that's just had its head cut off. Gemma informs her uncle that she's got some friends who are really keen to meet him.