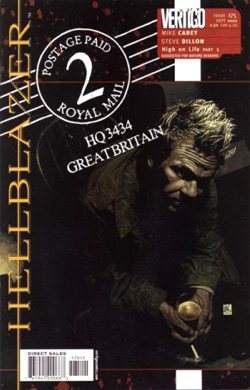 John Constantine: Hellblazer #175 (September 2002) Solicitation text: So far as the world at large is concerned, Constantine died in a prison riot a year-and-a-half ago -- and being dead has its advantages for someone with John's peculiar lifestyle. But he needs to set the record straight with what's left of his family. So he returns to Liverpool, the place of his birth, to see his sister Cheryl. There he finds her living in a rotting council block plagued by suicides and inexplicable acts of violence: a killer with a straight-edged razor is stalking the city; a strange old woman is dogging John's movements; and there's a mysterious agenda being played out that seems to promise nothing but evil for the last surviving members of the Constantine family. It's enough to make a man blow his cover...while this new storyline will blow your mind.

A bearded stranger arrives into Liverpool pier on a garbage boat. Obviously wanting to keep a low profile, he only stops long enough to pay off the boat’s captain and light up a cigarette before hopping onto a bus and leaving the waterfront behind.

Over in the Elster Towers flat complex, a disgruntled former employee of Harland and Wolfes hangs himself. When the police finally arrive on the scene, they busy themselves trying to untie the hanged man. As they try to pull witnesses from the assembled ranks of rubberneckers, the bearded man shows up and trades quips with the police before making his way to flat number five. Knocking on the door, the man is greeted by a stunned Cheryl Masters, shocked to find herself face to face with her brother – John Constantine – a man she thought long dead. Furious at him for staying out of touch for so long and leaving his family to think he was dead, Cheryl catches Constantine with a stinging slap across his face. The pair get reacquainted over a bottle of cheap wine and a few cans of beer, Cheryl tells John that she was the one who called the police to tell them about the hanged man and later explains that her daughter, Gemma, was devastated after hearing of John’s death, suggesting that the news played a major part in her moving to France to become a teaching assistant. Constantine makes plans to meet Cheryl later in the evening before heading out to take care of some business.

John drops into a greasy spoon café, “Uncle Joe’s”, to partake of breakfast and dig up some background on Elster Towers. Constantine learns of two other incidents that occurred there – one involving a man who put his wife’s eyes out, the other some kids who skinned a dog. One of the café’s waitresses wanders up to John and starts to talk to him about magic. In no mood to entertain whatever romantic notions she may have on the subject, a sullen Constantine tries to put her firmly in her place but instead finds her more than capable of trading jibes with him. John tells her that Elster Towers is “a great big spike of evil sticking out of a field of dead grass”. The waitress suggests that he should check the Tenants’ Register. Giving Constantine her phone number, she introduces herself as Angie Spatchcock and leaves the Englishman with some familiar words: “I’m a real piece of work, ask anyone”.

Checking the tenants’ register, John learns that outside of the Masters family, there were three new recent arrivals at Elster Towers - Dunbar, Trestle and Wren. With their details in hand, Constantine returns to the flats to check out his new leads. On entering the flat complex, Constantine can’t help but notice a palatable sickness in the air. The Dunbars turn out to be an innocuous middle aged married couple. Trestle is in fact Reverend Trestle. John’s efforts at checking in on Mrs Gladys Wren go awry when he is confronted by her imposing son who threatens to toss Constantine back down the stairs he’d just climbed. The timely arrival of the boy’s mother allows John to beat a hasty retreat, but not before he notes some odd markings around the doorframe of the old woman's flat. Later that night, whilst waiting in a pub for his sister, Constantine phones Angie to tell her that he felt a weird sense of peace and contentment emanating from Mrs Wren’s flat. Angie blows off John’s invite to join him in the pub, telling him that she’s about to wash her hair when she’s in fact on the way out the door.

Cheryl and her husband, Tony Masters, eventually show up. When his sister retires to the bathroom, Constantine finds himself sharing harsh words with Tony when he learns that she’s on tranquillisers. Angie sets up some ordinance survey equipment outside of Elster Towers as Cheryl returns to the two arguing men. Clearly emotionally distraught, Cheryl bemoans Gemma’s absence as John tries to convince her to leave the flat complex. Tony loses his temper with the magus and accuses him of being at fault for his wife’s condition. Cheryl in turn loses her patience with both men and tells Constantine to get his stuff out of their flat and to leave them alone. Angie’s foray into the field of ordinance surveying is derailed when trains her equipment on Mrs Wren’s flat. The woman herself appears in her window and Angie is sent reeling backwards. Before she can hit the ground, Mrs Wren’s son, who’s accompanied by another man, catches her. The second man pulls a razor blade and the pair starts to assault the still faint Angie.

John, Tony and Cheryl – who are all on their way back to the Masters flat – interrupt the assault and chase the two men off. An incoherent and badly cut Angie seems to suggest to Constantine that the sickness is spreading out in a ring from Wren’s flat.