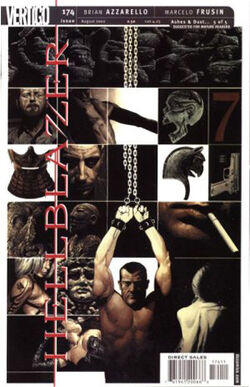 F.B.I. Agent Frank Turro, accompanied by Detective Havlik, speeds down L.A. roads to Manor estates. Havlik's got her own set of questions when she wonders if Turro is taking this a little too personally. Turro brushes it off without much thought and just chalks it up as his way of doing his job. Havlik doubts him entirely. So Turro begins to provide a bit of background on Manor. The man’s corporation is the country's most successful, and therefore most powerful. He’s got everyone and everything he can want and could ever have. Every drug that comes though probably has his fingerprints on it and even the President is afraid to say “no” to him. He distorts more lives than a vicious disease. After all of that Turro decides that he does take it personally. Only Havlik didn’t mean the suspect, she meant the victim. Turro brushes that one off too, claiming him a bastard just the same.

S.W. Manor and Father Sean continue inside while Manor continues his ranting. Manor’s obsession with Constantine turned from hate to love, then right back to hate. After the incident with his parents he wanted to destroy him without doubt, but to do that he needed someone trusting enough to pull it off. That need had to be met with someone that had been hurt by Constantine before, someone who lost his brothers and best friend when he trusted Constantine. He needed a special man, and a simple man – Ritchie Fermin. The plan was to use John Constantine’s own magic against him, the soil of hell he brought with him. Fredo once again interrupts Manor and delivers a guest. Father Sean recognizes the young boy standing inside the house as Tim. This moves him to demand what is going on.

Outside the gate to Manor’s home, Turro wonders where all the fog is settling in from. Havlik corrects him letting him know that it’s the polluted air and not fog. Turro find this amusing in the fact that they are about to arrest a billionaire industrialist. Havlik asks Turro if the two of them would like to hit the town after all this is over. A no phased Turro asks where she wants to go, and she presumes it to be a date. Turro’s quite overtaken by the suggestion but none the less agrees after a few passes made by Havlik. She’s more the pessimist thinking that the whole idea of coming here was a waste of time and that they won’t be allowed in. Turro’s hand goes for the gate but the shadowy figure of Constantine in the distance startles him. The gate has been, strangely, open for the two. Both of the authorities move towards the house cautiously.

Inside Manor talks to young Timothy. Tim is an orphaned the same as Manor. He’s one of the orphans from the shelter that began after Manor donated money to Father Sean’s church. Sean then asks what is going on again. Manor’s meaning is in his message, but since the priest cannot be quite to hear the message the meaning will be lost. Manor continues and asks whether or not young Tim knows how Father Sean gets his money for the orphanage. Timothy tells S.W. that Father Sean says to them all the time that the money comes from him. There’s a hidden secret that is shared between Manor and Sean and Manor continues to ask the boy questions. When Manor asks if Timothy knows where his friends go when they come to the house and don’t come back, the boy’s innocent answer of them finding families is corrected. Manor tells Tim that unlike himself, Father Sean believes so much in his faith that he is blind to much else in the real world. Sean looks horrified and then glances to a large tiger’s head mounted on the wall beside him. The horrible truth is starting to come clear to him.

S.W. Manor knows the hardship of an orphan life and all the money and possessions he provides them still do not cover the pain. He decides to give Timothy something more special than money and more satisfying to himself. The large case of vampire bats is in front of them and Manor shows it to Timothy, asking him if he would like to feed them. A frightened and enraged Father Sean shouts, and tosses both him and the large tiger head at the cage. With a scream from Manor the glass breaks sending the bats free inside the house.

By now Turro and Havlik make their way to the front of the house. Turro’s figured out that the charred body in the morgue isn’t Constantine. Havlik believes the witnesses and suspects him to be wrong. She asks whether or not Constantine was a snitch. Agent Turro and the rest of the F.B.I couldn’t get their hands on any crime that Manor may have been connected to. He needed a con-man and John Constantine was the perfect man for the job. The frightened Tim runs out of the front door while several guards follow closely behind with guns brandished. Turro tells Havlik to call for backup.

The bats flood out of the cage attacking Fredo immediately. He goes down to the floor while they swarm him. An enraged Manor grabs the badly cut priest and drags him from the shards of glass because he’s not done with his confession. The critically injured priest shows some signs of still living. The sound of gunshots from outside alerts him and he begins to drag him to another room nearby. Turro catches the men unaware and drops them quickly with a few shots before continuing on. Havlik shouts to him to wait for the backup but Frank seems more determined and heads on. Fredo, covered with the bats, staggers out of the door as he is ripped apart by hundred of them.

Inside Manor’s room of relics and collected artifacts, he continues his confession to the dying Sean as he obtains a spear from one of the statues.

Both Ritchie and Manor went back to the club that evening searching for Constantine. Manor was to use himself as bait. Again he was strung up in chain and being whipped when John found him for a second time. In the back several people are pissing on a man. An angered and unstable Manor warns Constantine that he shouldn’t have crossed him. In his arrogant fashion John told him he provided exactly what he wanted and the only reason he’s mad is because it wasn’t what he expected. Someone from behind calls his name and as John turns, he sees Ritchie holding the vial. John tells the Fermin brother that he doesn’t know how much power is in that small vial, but Ritchie is set to find out just how much. John doesn’t think he’s serious and with a smile he questions his motives. Joey is standing just a few yards away; a male companion is on his knees ready to satisfy. Constantine continues with his hypnotic suggestion. The vial, to John, is too heavy for Ritchie to be holding this long. He asks him how heavy that must feel. Peggy is on all fours and the closest to the three men. With another few warnings, John tells Ritchie to just let all that hate out, and just before Ritchie turns over the vial, Manor looks away.

Manor goes on to say that he could not watch John die, that it was too unbearable to see the man he both loves and loathes burn. He could not actually see him die, but he could smell it. The mixture of his body, breath and cigarettes were clearly distinguishable. Agent Turro moves into the room steadily with his run drawn in front of him. Manor’s spear comes down hard on Turro’s right hand, severing it quickly. Before he has a chance to react the blade is driven through his side and cutting him viciously. Manor asks who the man is as he falls to the ground. Turro, in all the chaos and pain screamed out the name of Christ which Manor laughs off asking where the beard would be. Manor goes to continue but is cut off by Turro who is trying to say something. The only words he can manage are “Con…”. Manor turns in shock, shouting at Turro where he sees John. Manor’s attempts to see him are hopeless and he starts to beg, raving as to why he let John put him in this position. Manor asks Turro what he’s doing. Turro softly and slowly tells him that he’s crying and reaching out for him. A mentally sick Manor begins to beg forgiveness, talking to no one in sight that he is sorry for murdering the one true thing that made him happy. He begins to sob and small trails of tears fall from his cheeks as he kneels to Father Sean’s, now, dead body and begs forgiveness that he can never give himself. Putting Turro’s gun to his chin he fires and kills himself. Stanley Manor’s blood splashes onto a devilish-looking gargoyle statue.

Agent Turro struggles to stand. Blood drips from his mouth as a figure moves to him. John Constantine stands over Turro’s body with a shadowed look of understanding and sadness. He uses Turro’s first name for the first time offering his hand to him.

Not long after, several L.A. police officers huddle around the lifeless body of Agent Frank Turro. One of them informs Detective Havlik that the commissioner is on his way and if anything else is needed. When he receives no answer he questions again. Detective Havlik looks around to the officers and asks: