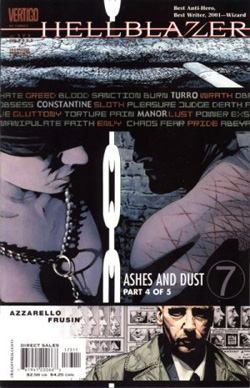 An eye witness member of the club begins to leak the truth of John and Stanley’s relationship though his own eyes. John’s lack of satisfaction at the club would sometimes break loose in a form of flippant and uncontrollable anger. Something that couldn’t be controlled usually, except for the comfort of his supposed boyfriend Stanley Manor.

Inside the L.A. precinct F.B.I. Agent Turro and Detective Havlik grill the witness, asking him for the name of John’s significant other. With little hesitation he refuses. Turro says that if they find the boyfriend they quite possibly have found the murderer. The witness doesn’t deny it and says also that there is nothing they could do to protect him if he is indeed guilty. He asks for a little lenience in the way of his handcuffs in exchange for the name, in other words toying with Turro and the investigation. Havlik restrains him from behind, causing what looks like sharp pain. The witness is still obstinate, screaming that what he’s doing is infringing on his rights. Turro simply smiles, informing him he’s not doing anything to him, and that he already knows who it is – he just needs a witness to confirm. With some strong persuasion the man gives in and Turro gets his name.

Back at Manor’s mansion S.W. continues the story of his relationship to Constantine. His hate for Constantine grew like a tree over twenty years. Manor even questions Father Sean’s own deep desires where a person would like to be on top from the ones that harassed and abused them. His place on top was and is John’s suffering. He put him in prison, meaning that tree bore its fruit and when John died, so did his grudge. There was nothing left for him to hate except himself.

John arrived to S.W.’s shortly after that night in the club. John had agreed to forgiveness and admired the plan Manor tried to formulate. Manor tells John he honestly just wanted him to stay in prison, but John assures him he was even when he was roaming America trying to make ends meet for a crime he didn’t commit. When asked what he feels about the mutual change in feelings to one another, Manor is at a loss for words. The two kiss passionately after John makes the suggestion that all kinds of feelings can be as consuming as hate. In return for Manor’s gift of a new trenchcoat, John has something for Stanley as well. Handing John his old coat, John reveals a small vial and hands it over to Stanley while telling a small story about a woman who used to collect dirt from the places she’s been, label them, and put them on display on the mantel of her house. Inside the vile is dirt from hell, John’s brought it and its extreme magical potency back as a gift.

Havlik can’t believe Turro. She thinks the whole idea of going after such a powerful man as S.W. Manor is crazy, even without a warrant. Turro is more headstrong and determined and heads for the car.

Manor goes on to say how happy he felt that night, more than he ever has been. When Father Sean questions the feeling as something foreign to a man like Stanley he gets on the defense. S.W. becomes angered, asking him what he could possibly know about his situation, or his responsibilities. The priest finds the anger unfair, which the word itself is a joke to Stanley. Fairness, to him, is just an excuse to why the poor are poor and people like him are rich. Manor took a small light bulb company and turned it into the world’s largest global manufacturer. When Stanley found Constantine and had him, he lost track of the most important thing he was searching for with all his money – his parents.

Recalling that night again, Stanley remember what he told John about his parents. They were murdered in front of him at gunpoint when he was just a child.. The image plays in his mind over and over again day after day. John finally understands why he collects such relics and supernatural trinkets, to find the right one that could possibly take him to the other side and to his parents. John assures Manor that he can throw these things out, and that he is the right one to give him exactly what he wants. Stanley continues to romanticize. John tied him up similar to when they met again in the S&M club and then began to whip him. It’s known in certain cultures and ancient religions that self mutilation can give someone insight and take their mind to a higher place. Manor uses the Catholic Church as a means for comparison with an objection from Sean. It seems not to bother Manor when he says that despite what does or doesn’t go on in public anymore in these days is irrelevant; it still doesn’t make it a lie. The feeling that overcame Manor was indescribable and for the first time since their death he saw his parents exactly how he remembered them. The two stood as ghosts in front of their only son as John ceased the whipping and lit a cigarette. He had given him what he most desired and then laughed. Manor’s parents spoke in whisper’s about how much of an embarrassment and horrible son he had become as John laughed on and on. John left Stanley alone with his parent’s ghosts – his demons. He screamed for his head guard Fredo and when he was released he couldn’t explain to him what had happened, the experience left him with a mental scar like no other has, so he told a bird instead. When he released the bird he knew what would happen to Constantine, because if you tell a bird something it will travel on and on between calls until someone can hear it and know just what had happened. That person turned out to be Ritchie Fermin.

Fredo interrupts and notifies Manor that the feeding time has come. A delighted Manor tells Father Sean to accompany him. At the front of the house a small child is being unloaded from a car.

Retrieved from "https://hellblazer.fandom.com/wiki/Hellblazer_issue_173?oldid=11200"
Community content is available under CC-BY-SA unless otherwise noted.