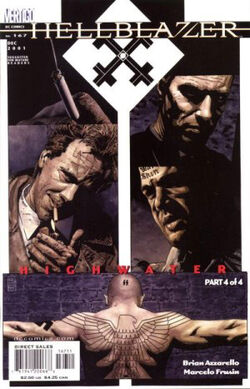 As Jimmy heads home from the pub, the rest of his neo-Nazi gang find their evening of drinking in the Highwater tap interupted by the resurrected remains of the Wolfman's bloodied corpse. Constantine watches on as the creature tears its way through the terrified men, mocking Kyle with the fact that the Jews are God's chosen people and that everything he believes in is wrong, before John's Golem squashes his head under foot. Gage receives some unwanted visititors of his own in the form of S.W. Manor and his men. Manor is keen to learn about the whereabouts of Wolfman.

As the police pull up on Gage's house, John undoes the magic animating Wolfman's corpse, causing the remains to fall lifelessly to the ground. Lucky's ghost makes another appearance and thanks Constantine for helping to free Marjorie from the unhealthy influence of Gage, he then scrawls the reason for his suicide on his pad, sharing it with Constantine but not the reader. Whatever the reason, it's enough to enrage Constantine who throws a punch at the ghost and then goes on to burn Marjorie's house to the ground. A furious John confronts Marjorie, telling her that he knows why Lucky killed himself and that she isn't even worth the effort it would take to hate her.

Retrieved from "https://hellblazer.fandom.com/wiki/Hellblazer_issue_167?oldid=8623"
Community content is available under CC-BY-SA unless otherwise noted.