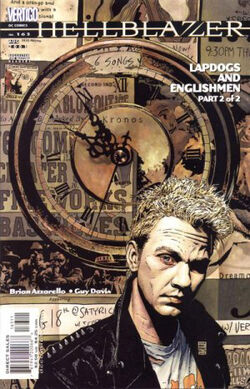 The rain pours down over Chas' car. Running out of a set of apartments cradling something in covered by a sheet, is John who, after immediately jumping in the passenger seat tells Chas to get a move on. As they speed back to Johns flat Chas tells John he had a bad feeling about this particular job. John reassures his friend he has nothing to worry about - that's his job. The only thing Chas has to worry about is driving and getting the treasure back in one piece

Back at Angie's the book remains wide open as she nervously smokes a cigarette at a safe distance from it. Warily she makes her way to it, flipping through pages aimlessly with a disturbed frown. It seems John's future is grimmer than she expected.

At John's Chas sits cracking his fingers nervously. John tells his to stop just before there is a knock at the door. Chas asks who it is before allowing the man behind to enter. Stanley asks Constantine why he allowed another person to be here during the transaction. John brushes him off, stating that the terms were his to decide and also he's not as brave as Stanley. As he urges to see the clock that lays wrapped on the table in front of the two, John reminds him of their deal and wants his share of it. Handing over an envelope of cash John finally reveals Rasputin's Clock to him.

Angie continues to study John's future, tracing over various sentences with her finger before slamming the book shut in horror. She appears devastated by the details and buries her face in her hands.

Stanley enlightens John to some of the traits of the clock. One of which being its marble base made from the Oracle of Delphi. John tells him he's got quite a prize, one that's gotten a lot of people killed trying to obtain it. This sparks Stanley's interest and asks how John managed to get a hold of the, though to be, unattainable. John answers with a simple explanation - he nicked it. A surprised Stanley can't believe John could have simply stolen the clock from his flat. John retorts with a history lesson of his own. Seems the Arab has had his teeth filed down to points and has a taste for red meat or preferably something with a still beating heart. Apparently this Arab fellow can also be in two places at one. One place, luckily for John, wasn't his flat. As John pulls a revolver there is another knock at the door, this time more loudly and desperate.

Immediately John asks who it is. The voice turns out to be Les, John's band mate and friend, and he's here to spread bad news. Les informs the three that the Arab knows his clock is missing, and he's here to make all of them pay. John's lights suddenly explode, shattering the bulbs above them. A distraught Chas panics at the sudden thought of death. Constantine assures him they're not dead…at least not yet. Armed with the revolver he tries to remain clam, but Chas makes yet another grisly discovering. A blood-like substance oozes out from under the closet door, and a frightened Chas shuts the door and finds his pants a bit damp. Stanley wants an explanation for this chaos, but Les is more interested in blaming John for their situation. Les argues with John, cursing him for allowing it to come to this. John quickly suggests a counter offer for his to shut up as the revolver aims squarely at Les. Les agrees but not for long. With a hard punch John land on the floor sending the gun out of John's hands and to the floor. Les takes it upon himself to end this and give the Arab back his clock before they all wind up dead. Meanwhile Stanley's gotten the gun and simply cannot have someone take away his precious treasure. Stanley fires the gun at Les sending him to the floor. John and Chas stand awestruck over Les's body, telling Stanley that they'll have to answer to murder if they live through the next couple of minutes. Stanley asks Constantine if they will while no one notices that Chas seems to be headed for the door. Before John can shout a warning he's covered by the same blood-like substance. Slamming the door he "panics" and tells Stanley it's the Arab. Stanley tells John to get out of the way, apparently wishing to take him on himself gun in hand. (Pffftt. Those crazy Americans.) John refuses Stanley's heroics and tells him to leave the gun with him and get the fuck outa dodge before he's next. It's best for him to get out of the country before the police (in cahoots with the Arab) find the bodies. He'll fend off the Arab long enough for an escape. Before Stanley makes his exit he tells John he'll never forget him and gently kisses his cheek.

The last thing Stanley hears is several gun shots and a loud scream as he speeds away.

The scream instead turns out to be John laughing. Chas appears momentarily, delighting in their comedic performance. John congratulates Chas as to his "pissing" performance. Les stands up explaining to John it had to look realistic or else Stanley wouldn't have believed the stunt for a second. John fires the gun which was loaded with blanks the entire time and then hands over a spot of cash for Les to go and by his mom and new clock. After his achievement Constantine lets it out, explaining that a clock that tells the future is a load of bollocks. He already knows the future, which is the same for everyone. Everyone lives life dully, and he's have nothing to do with that kind of future.

As a tearful Angie sits in silence a large shadowy figure appears from behind her. He asks is John Constantine's life story was interesting. A startled Angie has little time to answer before the figure makes his own assumptions by her appearance. Angie asks who he is, and how he got in her apartment. The stranger informs the already terrified Angie that he is who he is and can get anywhere he wants whenever he wants. (Hmmm...) Now it's decided he wants to look over another story: Angie's. Flipping through the pages he finally comes to a stopping point as it appears all the pages are white. Angie looks on troubled as the figure explains that his part is to be left untold. With that he snaps Angie's neck and collects the book. Now outside the figure walks down the rainy streets of London and out into the night.

Retrieved from "https://hellblazer.fandom.com/wiki/Hellblazer_issue_163?oldid=8619"
Community content is available under CC-BY-SA unless otherwise noted.