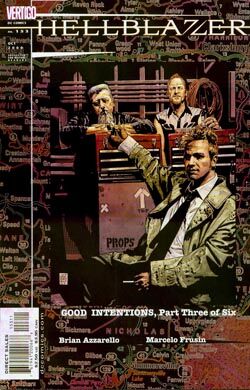 Out cold after his previous nights excesses, John Constantine dreams of his youth back in London, in particular of an encounter he had with a young American woman while he was still fronting Mucous Membrane. Out of place amongst the rank and squalor of a punk bar, the woman approaches the band after their set to compliment them on their music but she soon finds herself the victim of their crude leering. She turns the tables on a sleazy Constantine by jabbing him with a safety pin - at which point John is jolted back into consciousness. Dickie, meanwhile, gets another call and heads out to meet up with his brother Richie.

Dickie, now aware that Walter was the victim of Richie's experimental dental work, confronts his brother over the reasons for his murder of their business partner. Richie explains that Walter was getting greedy and was unwilling to share his profits with them, Dickie counters that Richie should have come to him so that he could have a word with Walter. At this point, Constantine makes one of his trade marked entrances, announcing his presence by stepping from the shadows and lighting a cigarette. A tense showdown ensues, with John confronting the two brothers over the events of the previous night. Dickie seems to like the Englishman but Richie bridles under his threats, his brother wins out however and hands Constantine a bundle of notes at payment for his part in the previous night's activities. Dickie sends John off to the motel to shower and invites him to come round his house for dinner later that night.

Night eventually falls and a freshened up, but still anxious, Constantine makes his way to Dickie's house for dinner. His journey finds him crossing paths with a group of children hurling rocks at a small cat kitten up in a tree. John asks why they're tormenting the cat and when none of the kids can offer an explanation he turns and walks off, seconds later one of the rocks hits home and the kitten falls lifelessly from the tree. As the children rush to the fallen animal, a large black cat appears from nowhere to stand protectively over it, it raises its glowing yellow eyes to stare at the children before asking "Why?" in a human voice. John allows himself a wicked smile as the children stare at his handiwork in disbelief.

Constantine finally arrives at Dickie's house where he is met by the tatooed man's wife, who just so happens to be the woman Rose he met in London so many years before. John tells her that he sometimes feels a pang of pain from where she once stabbed him with a safety pin. Deep in the woods surrounding Doglick, a pair of nocturnal human hunters make a grizzly discovery in the form of animal droppings containing the remains of human fingers.