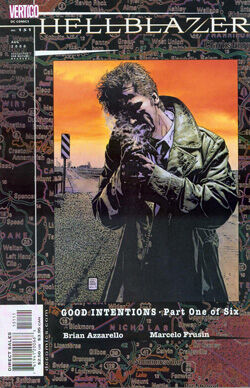 John Constantine, fresh out of prison and loose amongst the backwoods of America, takes some time out to bemoan the general lack of quality to both American cigarettes and tea before deciding to travel to the address provided to him by FBI agent Turro. Stuck on foot, and with Chas all the way back in England, Constantine is forced to hitchhike to his chosen destination - Doglick, West Virginia. Standing out on a barren back road in the middle of the night, Constantine eventually gets lucky when a travelling Aluminum Siding salesman named Craig stops to give him a lift.

The unfortunate Craig makes the mistake of trying to be friendly with the annoyed Englishman, inquiring politely as to just why John is in the middle of nowhere at the current time of night. Delighting in the presented opportunity, Constantine torments his new found chauffeur with the fact that he has only recently been 'released' from prison for shooting a man at point blank range in the face. Craig grows more and more uncomfortable as time progresses but Constantine refuses to let up, finally taunting him with the suggestion that he's not only a murderer, but a cannibal too. All of this proves too much for Craig, who decides that he's not going the same way as John after all.

Back on foot, and even further from civilisation than before, Constantine is left to trek along under the night sky. After a short walk he stumbles across two cars by the roadside - on one of which sits a man enjoying a cigarette. As John strikes up a conversation, a second man comes out onto the road side. Constantine asks the pair if they own the car on which they are sitting, when the reply no he assumes that the second car is theirs and asks for a ride. As the three men drive along together, they start to indulge in the contents of a beer cooler stashed on the backseat. Eventually John offers the pair a bottle of Jack Daniels - an offer they accept, happily drinking away as they drive.

As the pair voice their displeasure over their finishing of the JD, Constantine pulls a second bottle from the folds of his trenchcoat, much to the pleasant surprise of his travelling companions. John starts to speculate as to the large amount of dead animals that he's noticed by the side of the road - suggesting that maybe the bodies where left there by other animals, to warn their kin to stay away from the dangerous roads. The two men listen to Constantine as they light up a spliff to accompany their attack on the second bottle of JD. The conversation between the three takes a dark turn when John's two companions make it clear that they're going to have to kill him. The driver takes his eyes off the road to face Constantine, who seems to be taking the news of his approaching demise with unusual aplomb. That split second of carelessness costs John's companions their lives, as the car spins off the road and into a tree, sending both men through the car's windscreen and to their deaths.

A little banged up, but otherwise unharmed, John crawls from the wreckage of the car and unlocks it's trunk - revealing a bound and gagged woman inside. Constantine unties her and helps her out of the trunk. As John wanders off, the woman inquires as to the whereabouts of her husband. A grim faced Constantine suggests that she look off to the side of the road back near her car.

Retrieved from "https://hellblazer.fandom.com/wiki/Hellblazer_issue_151?oldid=8676"
Community content is available under CC-BY-SA unless otherwise noted.