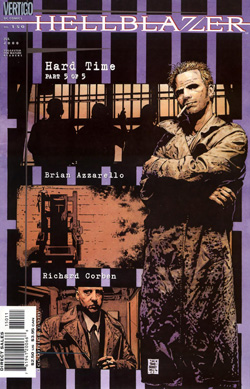 Driven over the edge of sanity by Constantine's apparently magical doings whilst confined in solitary, the convicts have managed to take over the high security prison. As plumes of smoke pour from various parts of the building, special agent Turro of the FBI makes his way into the confines of the mad house, all the while wondering why the inmates haven't deigned to make any demands in exchange for the lives of the twenty-seven men and women they are holding hostage.

Wandering through the nightmarish halls of the prison, Turro comes across the disfigured remains of several of the supposed hostages, adjusting the count of the probable surviving officers in his head as he does so. Turro continues to travel through the madness, passing the unfortunate Traylor who is still suffering at the hands of his deluded prison-mates, before finally coming face to face with John Constantine. John, strapped into an electric chair, but looking for all the world like he's relaxing in a comfortable leather recliner exchanges banter with the stone faced agent until the subject of Richard "Lucky" Fermin comes up.

Turns out that Richard, a small time con-man who worked with John in the past, was responsible for Constantine's incarceration. John recounts to Turro how he met up with an on edge Fermin in some dingy bar. Richard was desperate for Constantine's help, explaining to him how he had pulled a con on a man with serious money behind him, and now found himself with a large bounty on his head. After John refuses to help, the two have a confrontation in the bathroom, Richard pulled a gun on Constantine but when the Englishman disarmed him he begged him to shoot him. Disgusted, Constantine handed the gun back to Fermin. Richard put the gun to his own head and pulled the trigger. Constantine is arrested and tried for his murder, leading to his current situation behind bars.

Turro taunts Constantine for allowing himself to be put away just to alleviate his guilt at failing to stop his friend from killing himself. Finally, the agent appears to offer John the man responsible for Richard's suicide - S.W. Manor - in exchange for John returning the prison to the proper authorities. Constantine and Turro leave the prison together, the prisoners appearing to come to their senses around them as they pass. Turro and John exchange barbs, with Turro providing the Englishman with 'directions' to something or someone left unsaid, before parting company at the gates of the prison.

Retrieved from "https://hellblazer.fandom.com/wiki/Hellblazer_issue_150?oldid=8058"
Community content is available under CC-BY-SA unless otherwise noted.