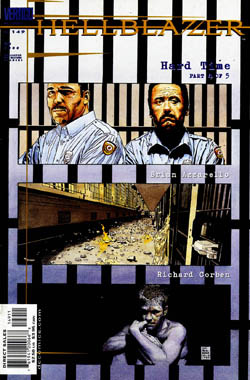 John Constantine, confined to solitary for the murder of Kelly, finds himself suffering from a bad case of nicotine withdrawal as well as contending with a visit from some dead friends. Tensions rise between two officers as they observe the growing unease amongst the inmates in the wake of the recent murder, on the wall behind them is a blackened fingerprint.

As Constantine's cravings go stronger, he finds himself confronted by a ghost who appears to have blown his face off. Meanwhile, things continue to slide out of control in the prison, with several scuffles breaking out between inmates as Stark and Buzz exchange harsh words. Stark, hearing voices in his head, loses his temper and tosses Buzz over some railings to his death. Again a strange black fingerprint rests on the wall behind the antagonists.

Stark's latest act of violence ignites the prison, sparking a brutal riot which threatens to leave the inmates in control of it. Traylor, in the midst of raping Candy again, is disturbed by the sounds of the chaos and goes to see what's going on again. Unfortunately for the convict, his fellow inmates see him as a woman and proceed to show their affection in brutal fashion. One more we see a black fingerprint on the wall in Traylor's cell.

Constantine, goaded by the headless ghost, finds himself freed by the convicts - each and everyone eager to present him with the cigarette he so desperately craves.

Retrieved from "https://hellblazer.fandom.com/wiki/Hellblazer_issue_149?oldid=8057"
Community content is available under CC-BY-SA unless otherwise noted.