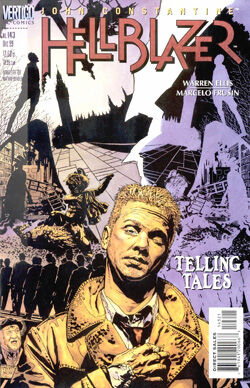 Irvine St. John, a creative writer, approaches John Constantine with a view to learning the truth behind 'Secret London'. Reluctant at first, Constantine gradually gives way and recounts the tales of an alien lizard royal family and the secret behind the Kennedy assasination.

When Constantine takes a brief toilet break, the relative peace of the pub is shattered as a gun shot rings out. Rushing to the bathroom, Irvine spots a puddle of blood forming from the one occupied cubicle. Fearing for his life, he flees the scene of the crime.

John, meanwhile, has bunked out through the bathroom window and is more than pleased with his ruse over the writer, revealing to Chas that he'd been asked to throw St. John off his current path of inquiry as it was in danger of exposing a sex'n'drugs ring.