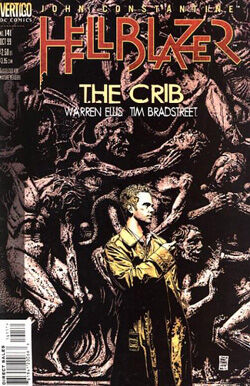 David Niles, a failing New York writer, is not having a good time. Ever since he started investigating an object believed to contain the immortal miscarried fetus of the antichrist, the Crib, he's sure that he's been followed.

When an unexpected visitor shows up on his doorstep in the middle of the night, Niles kills the lights in a vain bid convice his visitor the he's not in.

A non plussed Constantine somehow ends up inside David's appartment, spuring the writer into a hasty tribe which leads to the revalation that Nile's is now under the control of the Crib.

A slightly bemused John points out that David's inadvertant meeting with a mass murderer has done bad things to his sanity and led to his fabrication of the Crib - which turns out to be nothing more than an old biscuit box with a mouse trapped inside.

Retrieved from "https://hellblazer.fandom.com/wiki/Hellblazer_issue_141?oldid=8045"
Community content is available under CC-BY-SA unless otherwise noted.