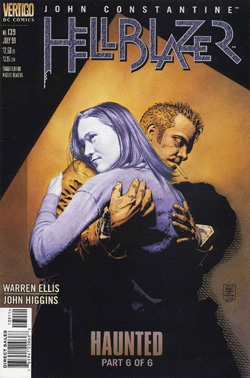 Tied to a chair in what appears to be a decrepit morgue, Josh receives a beating from Watford before Constantine forces a hit of acid into his throat. John tries to discern the reasons behind Wright's actions but quickly learns that Josh's motivations never stretched beyond his own evil attitude towards the more mundane members of society.

With satisfactory explanations received, Constantine reveals the final part of his plan, getting Watford to manhandle the bound Wright into a mortuary slab with the rotting corpse of Isabel as the acid starts to take effect on him.

As dawn breaks over London, a naked blood stained Josh Wright stumbles through the streets. John returns to the playground haunted by Isabel. It transpires that the death of Wright hasn't sent her on her way so John enlists the aid of Albert to ensure his old girlfriend makes it to whatever passes for the afterlife.

Retrieved from "https://hellblazer.fandom.com/wiki/Hellblazer_issue_139?oldid=8043"
Community content is available under CC-BY-SA unless otherwise noted.