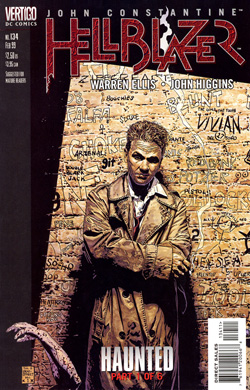 A seemingly innocuous mistake by Constantine's paperboy sets John on the trail of a murderer. Flicking through the pages of a tabloid paper mistakenly thrust through his letter box, John is shocked to find the news of an old friend's murder. Isabel Bracknell joins the list of the dead associated with John. Constantine calls in a favour from Watford, a cop on whom John has some dirt. Stopping only to keep an annual engagement with the aging Clarice, who warns him against using Isabel's death as a means to satisfying his need for excitement, John visits the murder scene.

Watford furnishes Constantine with the grisly details behind Isabel's murder. With Watford's horrific words running through his head, John leaves the scene of the crime and heads back onto the streets of London. Lost in thought, Constantine is stunned to spot the woman whose murder scene he has just departed before him.

Retrieved from "https://hellblazer.fandom.com/wiki/Hellblazer_issue_134?oldid=8038"
Community content is available under CC-BY-SA unless otherwise noted.