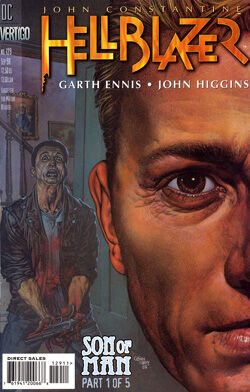 Chas gets involved with a gangster named Harry Cooper when he tries to wipe out a debt and finds himself unknowingly made the getaway driver for a gang hit. He goes to John hoping to get some help in eliminating evidence, but John tells him that he can't cast a spell to make the car and body disappear so they dump them outside London. John then admits to Chas that he's met Harry before when the man's son was killed and Harry demanded that John bring him back from the dead. John tells Chas he couldn't, so he brought something else back instead.

Retrieved from "https://hellblazer.fandom.com/wiki/Hellblazer_issue_129?oldid=9955"
Community content is available under CC-BY-SA unless otherwise noted.