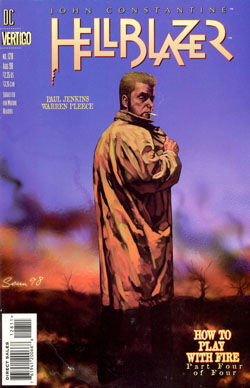 John Constantine: Hellblazer #128 (August 1998) John communes with God, and asks the question on everyone's lips: "Why?"

A disheartened, embittered John Constantine confronts his maker. Clearly angry at his own failings, Constantine whines about the state of the world and God's unwillingness to make it all better, countering John's bitterness God questions the wisdom of allowing the whole world the same insights which John has gained. Begrudgingly, Constantine accepts God's point as the various factions of hell who allied against him (Ellie et al) get exactly what they deserve (thanks to John selling his soul to The First ).

When God learns that John has sold his soul to the devil, and Constantine makes a veiled threat about his inevitable rise through the ranks of hell and his plans for heaven thereafter, God agrees to remove the taint from John and his friends (which they gained thanks to the events which transpired in Last Man Standing). A final confrontation with Dani and Rich leaves John alone and disheartened, his only comfort being the fact that his friends have for once escaped pretty much unscathed.