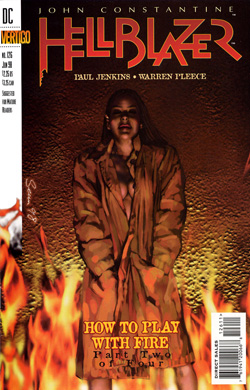 John Constantine: Hellblazer #126 (June 1998) John's life continues to crumble: Buer convinces Crowley to take up permanent residence in Weeble's body; John's family are taunted by visions of Thomas Constantine trapped in Hell; the Demon Constantine is tortured in the inferno, and Ellie turns Dani against John by framing him for infidelity.

Still reeling from Jack's announcement, John finds himself being confronted by an angry Gavin who taunts him with the knowledge that all of John's friends now want nothing to do with him. Buer seeks out Weeble, who's deep in conversation with the spirit of Crowley as he suffers in hell. Buer pulls Crowley's spirit from hell and offers him freedom if he's willing to serve Buer's new master. Faced with little choice, Crowley agrees.

Anxious to prove Gavin wrong, John seeks out some of his friends - Strafe has lapsed into a deep depression following the death of his mother and John's sister refuses to see him. When Gemma seeks out her uncle, John learns that his sister's family have been having nightmares about her father, who blames John for his plight in hell.

Making his way back to London proper via the underground, Constantine finds himself confronted by his demon self - anxious to rejoin with his human self as, now that he's lost Crowley's soul he suffers the torment of hell himself. John refuses to rejoin Demon Constantine but promises to help him.

Dani wanders into John's flat and finds another woman sleeping beside him. John wakes as she runs from his flat, recognising the other woman as Ellie, he races after Dani. His efforts are in vain though and she drives off. Ellie warns John that he's about to be taken down.

Retrieved from "https://hellblazer.fandom.com/wiki/Hellblazer_issue_126?oldid=8114"
Community content is available under CC-BY-SA unless otherwise noted.