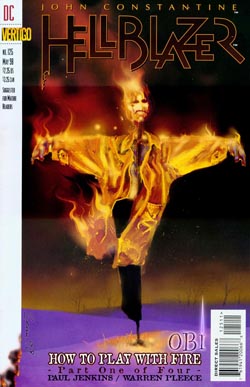 John Constantine: Hellblazer #125 (May 1998) Gavin and Pam's plot to destroy Constantine begins in earnest when Gavin hospitalises Muppet in a car crash and summons Buer from Hell to goad Lofty into anger. Meanwhile, Pam forces Slobodan to relive his terrible war experiences and Jack of the Green, ill after the events of Last Man Standing, closes Abaton from human contact. Only then does Pam reveal her true identity: the succubus Ellie!

This issue opens with John back in the forest where he met God. Crouched over a fire and clutching the Butterfly amulet he picked up during his confrontation with Myrddin - John admits that he's in desperate trouble and that, once more, his life has fallen to pieces.

John thinks back to where things started to go wrong - Ivy Mae's christening. Even though the ceremony passes off without incident, Constantine starts to get a familiar sense of foreboding - a feeling not helped by the surprise attendance of several of the Abaton crew at the christening. As John's sleep is interrupted by nightmares (he finds himself alone in a field - everything around him dead), Muppet finds himself the victim of a hit and run driving by both Pammie and Gavin.

John visits Mup in the hospital, learning that his condition is critical. John wanders into his room and casts an off the cuff remark - which serves to annoy Lofty and another of Mup's friends. The pair leave in disgust. Pammie and Gavin meanwhile, step up their efforts to increase John's suffering by summoning the demon Buer, the pair offer him not only the chance to escape his torment but both the chance to gain revenge of John and Crowley. Buer immediatly goes to work on Lofty - altering his memory and making him think that it was John's fault that Mup crashed. Pammie seeks out Slobodan and makes him think that he's seeing ghosts from his past and that this is also John's fault.

John receives a visitor of his own - a furious Jack In The Green. He reveals to John that the essence of magic within Muppet (which he gained after consuming a part of Bran The Blessed's head) has started leaking out - causing serious damage to Abaton. Jack reveals that he's sealing off Abaton from the outside world, leaving John to watch angrily as he loses another friend. Watching this scene unfold from the comfort of their car, are both Gavin and Pammie. Pammie reveals that she's in fact the succubus Ellie.

Retrieved from "https://hellblazer.fandom.com/wiki/Hellblazer_issue_125?oldid=8113"
Community content is available under CC-BY-SA unless otherwise noted.