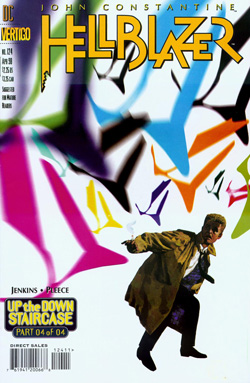 John Constantine: Hellblazer #124 (April 1998) John enlists Weeble's help to free the Wright family from the malign forces that are affecting them and simultaneously solves The First's question. Things look bad, however, when Gavin realises that Constantine was directly responsible for Pam's death and vows to murder him.

George reveals what a quiz really is. Apparently the word was created back in Dublin during the late 1700s. Two men, worse for drink, make a bet - one of them bets the other that he can introduce a new word into the English language. This man pays local urchins to paint the word 'Quiz' all over Dublin - this grafitti becomes the talk of the town and as a result, Quiz found it's way into the English dictionary. It's inventor actually intended the word to mean something along the lines of a "practical joke" as opposed to "a puzzle", the point of this tale being the fact that the man had no control of his creation - his idea took on a life of it's own.

John concludes that we literally created the 'IT' with our need for the great event and that we feed it by giving in to the crass commercilism around us. With the danger identified, Constantine sets about fighting it. John phones Weeble in a bid to learn a little bit more about psychic transference.

Meanwhile, Gavin's recollection of his last night with Pammie continues to twist and change. Now he's not only convinced that he never got his hands on the magical tome but that John beat him to it. He now believes that this led to a fight with John, after which, Constantine drugged his drink - which was the real reason for the accident which killed Pammie.

In a bid to break 'ITs' control over Dani's family, John forces Leonard to channel Grandpa's memories into his sleeping family's dreams. The following morning, John learns that the mood in the house has changed drastically and that his plan appears to have worked. A run-in with The First dampens any would be victory party as he taunts John with the knowledge that he's done nothing to save the rest of the populace from IT. Before he leaves, The First hands John a business card and promises that Constantine will feel like calling him in the not to distant future.

This issue ends with Gavin pointing a pistol at a picture of Constantine.

Retrieved from "https://hellblazer.fandom.com/wiki/Hellblazer_issue_124?oldid=8112"
Community content is available under CC-BY-SA unless otherwise noted.