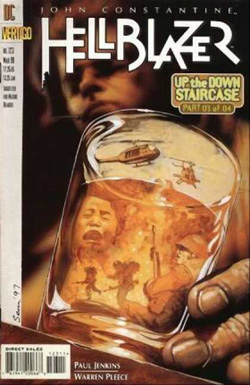 John Constantine: Hellblazer #123 (March 1998) Gavin's memory seems to be failing him when Pam points out that Constantine was more involved in her death than he seems to recall; a gunfight in the Wright home thankfully claims no lives but fragments the family even more; John comes one step closer to answering The First's question.

Gavin continues to talk with his dead wife Pammie, who claims Gavin's recollection of the events on the day of her death are wrong. According to Pammie, Gavin never managed to track down 'MacAdams Treatise On Terror Magick, With Gunpowder Illustrations' and that (an ignorant acting) John Constantine practically dragged the young couple into a pub, got Gav drunk and then insisted on Gavin driving home, which led to the accident that killed Pammie.

The bullet fired by Dani's brother finds its mark - the kitchen window. Tensions continue to rise and John finds himself stuck with a family on the verge of destruction and, surprisingly enough, the one man he has something in common with is the level headed Uncle Fred who is also aware of the destruction occuring around him. The First continues to haunt John in his nightmares, taunting him with images of Dani's family being killed.

A desperate Constantine returns to the Veterans Hospital to seek the help of the ex-soldier who verbally abused him days earlier. The Vet recants his views on the decline of America - how a false self of Patriotism, created by ad-men and their ilk, has risen since the disaster of Vietnam, the Vet also claims to know what a quiz is.

John leaves the Vet and joins Dani on the ski slopes, thinking that he may have found a way to beat The First Of The Fallen again.

Retrieved from "https://hellblazer.fandom.com/wiki/Hellblazer_issue_123?oldid=11173"
Community content is available under CC-BY-SA unless otherwise noted.