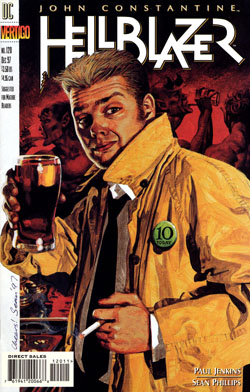 John's 10th anniversary issue opens in his local watering hole - treating the reader to a pint and stopping only to give brief praise to his creator before deciding to bring us on a tour of his (Johns) stomping grounds. As we follow Constantine out onto the rain soaked streets, Paul Jenkins makes an appearence to demand that we be careful when with John. Once outside we run into Rich and his wife, agreeing to meet them later for a pint before heading onto John's first planned stop - Archie Fein's Magic & Tricks - a local magic shop.

Following a brief introduction to Archie, John heads off into the back of the shop to make a call, leaving the reader alone with the grey haired shop owner. Archie is of the opinion that all magic is illusion but that John believes it to be real. Archie treats us to a story of John's past - one in which Constantine nearly met his end at the hands of a local crime lord. Only the timely return of Constantine stops the reader from losing a finger.

En route to our next stop we run across a timid, long haired gentleman who offers us a copy of 'The Witness'. John tells the man, who bears an uncanny resemblance to The First Of The Fallen from Constantine's tales, where he can go with his leaflets.

Next John introduces us to a fake healer - the Reverend Neville Sharp moves among a gullible crowd, giving them messages from dead relatives using information gleaned by his backroom boys. We learn that John used to work with this group and one of their number recounts a near disastrous event from the past which seemingly produced a real life miracle.

Back on the rainy streets again, John leaves us alone as he pops into a newsagents to pick up some cigs. A wretched looking man calls us into a nearby pub, the man is actually the spirit of Gary Lester and he is in the company of others who have died because of John Constantine. Gary begs the reader to stop Constantine before others are killed. Slightly unnerved we leave the pub and hook back up with John.

Chas arrives on the scene and as he drives the reader and Constantine to Dani's place, he recants a tale of a younger Constantine. A tale which paints John in a slightly silly light and helps the reader to understand that a lot of the time, John Constantine knows as little as those around him, he just talks a very good fight.

Arriving at Dani's, John leaves to answer the call of nature and Dani reveals a dark secret of Johns - he makes toy furniture out of old match boxes.

Seeking to save face, John offers a bribe to the reader and then procedes to take us into The Green for a brief meeting with Jack (but not before a quick anti-drugs rant).

As if seeking to reinforce how real his world is - John takes us to visit a demon he has managed to capture - things go wrong and both John and the reader are forced to run for their lives.

This issue ends where it began - back in the pub - where John questions how real he and the stories he tells are, before coming to the conclusion that "Reality's just a story that's taken on a life of it's own.".

Retrieved from "https://hellblazer.fandom.com/wiki/Hellblazer_issue_120?oldid=10986"
Community content is available under CC-BY-SA unless otherwise noted.