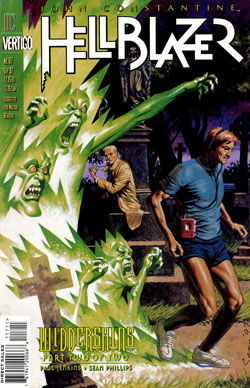 John Constantine: Hellblazer #117 (September 1997) Slobodan, possessed, threatens the life of his own daughter. Can Constantine strike a deal with the ghosts before anyone dies?

This issue opens with John's unique explanation of the reason for hauntings before focusing on the mater at hand - the knife wielding Slobodan. The spirits, angered and confused by their disturbed slumber, focus on Constantine as the cause of their plight. As they try to threaten Constantine with the death of their hostage, Weeble shows up and announces that the spirits are 'desperate' and confused. Weeble performs an exorcism of sorts and purges the ghosts from Slobodan promising that John and himself will try to help them.

As things return to semi-normality - John cadges a lift to the cemetary off long suffering Chas. A recent switch in the traffic flow leads to Chas crashing his cab and Constantine discovering the reason behind the recent 'ghost outbreak'. It turns out that Ken, the jogger from last issue, had poorly planned his daily route. Said route led him to run anti-clockwise around the graveyard. According to legend, the spirits of the dead are offended by said action and have a tendency to come back and haunt the perpetrators (the act of walking counter clockwise around a grave is knows as 'Walking Widdershins').

John confronts Ken and using a little bit of magic suggestion convinces him to cease his jogging, in order to ensure the proper flow of traffic in the graveyard, John rearranges the recently changed signposts.

As another week draws to a close, Constantine and company reassemble in their local watering hole but as everyone proceeds to get rat arsed (and Slobodan continues to adapt to his new surroundings), John stands apart - a sense of foreboding falling upon him.

Retrieved from "https://hellblazer.fandom.com/wiki/Hellblazer_issue_117?oldid=8105"
Community content is available under CC-BY-SA unless otherwise noted.