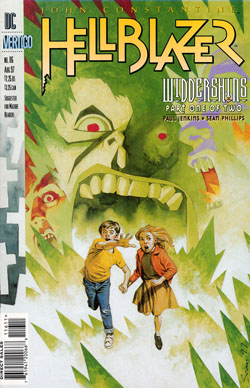 John Constantine: Hellblazer #116 (August 1997) Restless spirits in a local graveyard erupt in a volcano of psychic activity, threatening to claim the lives of everyone around - but what is upsetting them?

As a group of workmen dig up a local graveyard (to build a road or whatever) and the spirits of it's inhabitants are woken from their slumber, John and his circle of friends are indoctrinating a new friend of Rich's in the local watering hole. This ‘friend’ of Rich's is a Serb by the name of Slobodan. Slark voices her concerns to Dani that he could be ’a war criminal or summink’.

The awakened spirits try in vain to find a way to vent their anger until they manage to temporarily possesses Weeble and as they plead to be left alone the phrase ‘Keep away your dog Constantine' is uttered. Slobodan manages to buy his own house in Selhurst and as Constantine & Co help him move, Syder and his friend are confronted by a particularly nasty old spirit who proceeds to scare the pair out of their wits.

We are then introduced to four different characters - Irene - who’s just received her order of child pornography from Amsterdam, Mrs. Walker - an elderly lady who can feel that something isn’t right out in the graveyard and who misses her dead husband, Ken - who take’s a run every evening whose path happens to run through the graveyard. He makes this daily run because he fears he’s getting fat and old and finally there’s Jane - who appears to hate her boyfriend.

The following morning, John lounges about as his mates work around him. Following some particularly poor English, Slobodan (who when asked if he’d settled into his new place replied - ‘Ah, I slipped in piss’ as opposed to slept in peace) finds himself being laughed at. Slobodan appears to lose it totally as he hurls a chunk of metal which very nearly takes Rich's head off. This seems to be the catalyst for the angered spirits to act - Ken is possessed, the spirits of dead children arrive at Irene's front door, Mrs. Walker is attacked by the ghost of her own husband.

Meanwhile Weeble confronts John, blaming him for what’s going down. As Constantine tries to figure out what the hell is happening, he is called into Slobodan's house where he finds the Serb, apparently possessed, about to stab the girl Syder was playing with earlier.

Retrieved from "https://hellblazer.fandom.com/wiki/Hellblazer_issue_116?oldid=8104"
Community content is available under CC-BY-SA unless otherwise noted.