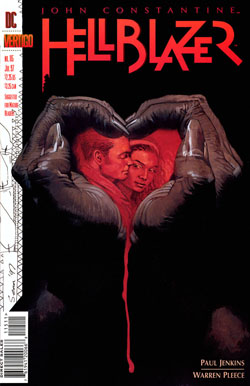 Following his recent confrontation with Myrddin, John finds himself preparing to fight a battle of a different kind - a Dani who is rapidly approaching 'that time of the month'. As John travels to meet his destiny, he ponders the direction his relationship with Dani has taken since their recent brush with death. He points out the main difference between her and Kit - whereas Kit wanted to stay away from the nastier side of John's world, Dani wants to be involved in it.

When Constantine arrives at Dani's flat, he finds her nursing a rather nasty looking black eye. Reluctantly, Dani tells John of the man responsible for her condition, an old boyfriend she hasn't seen in over a year. After hearing Dani's tale, John seeks out 'lady Jamma' the voodoo equivalent of two thugs with baseball bats - only a lot nastier. John pays Jamma to hurt, but not kill, Dani's "old flame". Jamma's voodoo revolves around Dani's period, and in order for her work to be effective Constantine must increase the tension between himself and Dani as her time approaches.

Of course this is second nature to Conjob so soon poor old Dani is a fuming baggage of frustration. This appears to have the effect Jamma was looking for, as Dani's abusive ex-boyfriend finds himself suffering from period problems as well. Things go from bad to worse for this tosser as Jamma confronts him in his dreams with his biggest fear - a physically stronger Dani. Following a rather humiliating encounter, he phones Dani and begs her to leave him alone (Did I mention he woke up with breasts? No? Well he did). As Dani tells John of said phone call, John opens an envelope sent to him from Jamma, inside is a photo containing an amalgamated photo of Dani and her ex. The whole thing ends with Conjob slagging Dani and receiving a loaf of bread to the head for his troubles.

Retrieved from "https://hellblazer.fandom.com/wiki/Hellblazer_issue_115?oldid=8102"
Community content is available under CC-BY-SA unless otherwise noted.