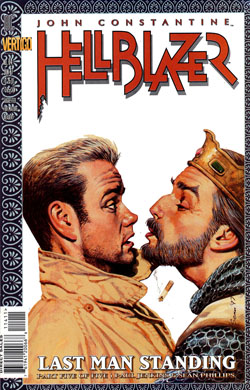 John Constantine: Hellblazer #114 (June 1997) With his friends held captive and waiting to die, John picks the perfect moment to let Myrddin in on his masterplan.

This issue opens with a brief recap of some of Constantine's more memorable encounters to date, including the Newcastle fiasco and his initial encounter with the First Of The Fallen. As attention returns to the present, John continues to taunt Myrddin, who in turn is still threatening to kill Constantine's friends and loved ones. As Myrddin moves to kill Dani, John hands over the box but as Myrddin grabs it, he collapses to the ground. Constantine then reveals the purpose of the box and the whereabouts of its contents (the head of Bran the Blessed). It turns out that the box was a trap set by God to destroy the Eternals (of whom he's jealous). As to the whereabouts of Bran - well, guess what John served for dinner last month...?

Now, if Myrddin harms John's friends, the piece of the secret within them will be released - apparently this will have drastic effects on the Eternals. It also transpires that John's bust up with his friends was all an act to lead Myrddin into this trap. As John explains all this to the poisoned Myrddin, King Arthur shows up in a bid to explain why God wanted to kill the Eternals. After Arthur leaves, John's friends regain consciousness and, for once at least things appear to have a happy ending.

In the weeks that follow John's friends (wittingly or not) unleash a part of the power within them and 'heal' some of Britain's polluted land. At the funeral of the unfortunate Dez, Constantine appears to resolve that he must stand alone and he leaves Dani. As Constantine journeys home on the bus however, he has a change of heart and as Dani arrives home she finds a smoking John standing in her doorway. He greets her with 'I changed me mind'. Dani punches the smiling Constantine before embracing him.

Retrieved from "https://hellblazer.fandom.com/wiki/Hellblazer_issue_114?oldid=8101"
Community content is available under CC-BY-SA unless otherwise noted.