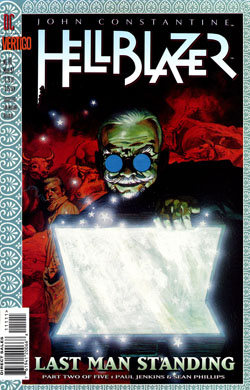 John Constantine: Hellblazer #111 (March 1997) As England continues its death-throes, Constantine is asked by Arthur's men to find Arthur's descendent and true heir to the throne, and that man is... Rich the punk?!

Sandda continues to try and persuade Constantine to aid Arthur's court, telling him of the argument between Arthur and Myrddin, the reason for which is still unknown. Sandda introduces John to his brother Sgilti who he claims has been observing Constantine for several weeks and has confirmed that John is the one to help them. Ignoring his better instincts, John buckles and agrees to help.

Whilst relaxing with Rich (who's now in training to become the worlds first punk ski jumper), Slarky and Dani, John tries to explain to Dani what lies ahead but she puts him off, explaining that she and the others are not his responsibility that they can look after themselves. With the help of Dez, a regular nethead, John learns that the government are building bypasses through every sacred site in Britain , disrupting the ley line energy that runs throughout the country.

The court of Arthur assembles to meet Constantine but things go horribly wrong when all are attacked by Myrddin's men - the bodies of Arthur's eternal court are riddled with bullets and Constantine brought to a face to face meeting with Myrddin himself. Myrddin explains the reasons for his argument with Arthur and charges Constantine with finding the Holy Grail he seeks. Constantine asks why he should help, Myrddin answers by giving him a bag which contains Dez's hands. Myrddin leaves John with the threat 'I can get to any of your people'. As John mourns the loss of another friend , Jack (an elemental from Abaton) shows up and asks for John's help. Misunderstanding Jack, John refuses but Jack explains that the grail can only 'be held by a king of rightful blood' and that all John must do is ask him to help. Reluctantly John agrees, but when he learns of the king's identity, he receives an even bigger shock then when Rich asked him to play Godfather.....

This issue ends with John addressing Rich, who's lying face down in a field, with the words 'We need to talk...your majesty'.

Retrieved from "https://hellblazer.fandom.com/wiki/Hellblazer_issue_111?oldid=9366"
Community content is available under CC-BY-SA unless otherwise noted.