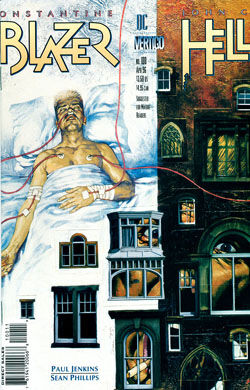 Constantine thought his troubled past was left far behind when he drained Nergal's demonic blood out of his system (in Critical Mass), but the sudden loss of supernatural power has caused his system to enter severe shock. As his body collapses in hospital, John finds his soul being dragged down to Hell by the First of the Fallen to see his damned father...

Retrieved from "https://hellblazer.fandom.com/wiki/Hellblazer_issue_100?oldid=8658"
Community content is available under CC-BY-SA unless otherwise noted.